An earthquake, even a little one like the one that woke me up in the middle of the night a few weeks ago, gives me a feeling of sheer terror and helplessness. If the Big One ever hits, I wonder not just what will be the practical repercussions for me but also if I'll react sensibly or just sit there frozen to the bed with my eyes wide and the adrenaline pumping while my house crumples around me and the San Andreas swallows me up.

In all actuality, this is unlikely to happen.  I mean, it's very likely that I will remain frozen in bed, but the likelihood of one's house crumpling down is far less than one's household possessions becoming flying projectiles.  Flying projectiles are a more likely source of injury in an earthquake than structural damage.  I've been researching this subject since I now live on top of the San Andreas fault.  Actually, if you're in bed when an earthquake hits, the safest thing for you to do is to stay there and put a pillow over your head.  Maybe I'll survive after all.

The San Andreas fault cuts through California north to south. Check out this map of the approximate location of the San Andreas fault.  If you zoom in to Redlands (directly east of Los Angeles), you can see that the fault traces the base of the mountain range just north of town.  This is literally in my back yard.  The San Andreas is the big one, but there are a ton of other smaller faults all over the place around here.  Little earthquakes, mostly too small to feel, are happening all the time.  You can view an interactive map of recent earthquakes from USGS if you want to feel a bit paranoid.

There are things you can do to make your house safer in the event of a big quake.  You can install expensive structural reinforcements and bolt your house to its foundation, but it's probably more important to take care of the flying projectile problem.  Don't leave a lot of nick-knacks around, or use museum putty to stick them onto the surfaces they sit on.  Make sure top-heavy furniture is strapped to the wall.  This isn't a problem for me, as I don't really have any furniture at all. You actually can't sell a house here with a hot water heater that isn't strapped to the wall.  They're not legally allowed to write you a deed or whatever.

I decided I should secure my kitchen cabinets so that heavy dinnerware wouldn't fly out of them if the house starts shaking.  This seemed simple, but of course it wasn't.  I initially purchased a package of plastic hook latches that go on the inside of the cabinets, specifically meant for earthquake-proofing.  The hooks have to be manually flexed in order to open.  If you just pull them they get caught in a little catch.  It's basically a glorified baby-proofing latch.  However, it required quite a lot of strength to push the hooks over the catches, and it was too annoying for cabinets I open and shut regularly.  I tried it for a week and decided it wasn't going to work for me.

So, I looked around online for other earthquake-proofing products.  I saw a few products that were supposed to only lock during a quake.  One had a hook that supposedly would drop down only when shaking is occurring.  It looked dubious to me because it would be nearly impossible to test, and you wouldn't find out if it worked until it actually mattered.  Also, since the direction of shaking isn't predictable, how can you guarantee that it would shake in the right way to send the hook into place?  Another product remained locked with a plastic hook until you push the cabinet door inward, and then it releases the catch.  This also seemed dubious to me.  If the shaking were strong enough and the cabinet door heavy enough, couldn't the force of the shaking press the door inward by itself, thus releasing the catch?

I gave up on earthquake-proofing products and decided to just install sturdy latches on the cabinets.  I had this brilliant idea to put barrel bolts on them, the kind of cylindrical sliding latches you see on bathroom stall doors.  By "brilliant idea", I actually mean "very Dumb idea, and poorly executed".  I decided that I should install the latch with bolts that went all the way through the cabinet door.  The cabinets are particleboard, and I figured that wood screws would just rip out if put under sufficient strain, whereas a bolt secured by a nut on the other side wouldn't budge.  Okay, that part is still brilliant.  The next part is Dumb.  I drilled a bunch of holes through my cabinet door to secure the latch in place.  I put the latch on and then realized to my chagrin that the bolts/nuts stuck out through the back of the door and hit the cabinet frame, preventing the door from actually shutting.  Duh!  So I drilled a bunch more holes higher up on the cabinet door so the bolts wouldn't hit the frame.  I installed the latch.  I tested the latch by pulling on the cabinet door handles.  The doors swung outward, and the cylindrical barrel bolt just slid right out of its catch.  It did no good whatsoever.  Barrel bolts don't work when both sides are on movable surfaces.

I generally pride myself on my mechanical aptitude, but perhaps I should reevaluate.  Ah, whatever.  I blame it on The Dumb.

After thoroughly investigating all my other latch options, I finally settled on some spring-loaded hook latch catch thingies (there must be an official name for these) like what you would see on the outside of a toolbox.  I drilled some more holes in my cabinet door and installed one of them.  It was perfect!  It's easy to open when you need to, but it won't open when it's locked.  My plates and bowls can fly around inside the cabinets as much as they like, but they won't be able to escape and decapitate me.  I secured the latches with bolts that go all the way through the cabinet, and I used lock washers to hold the nuts in place so they don't loosen up over time. 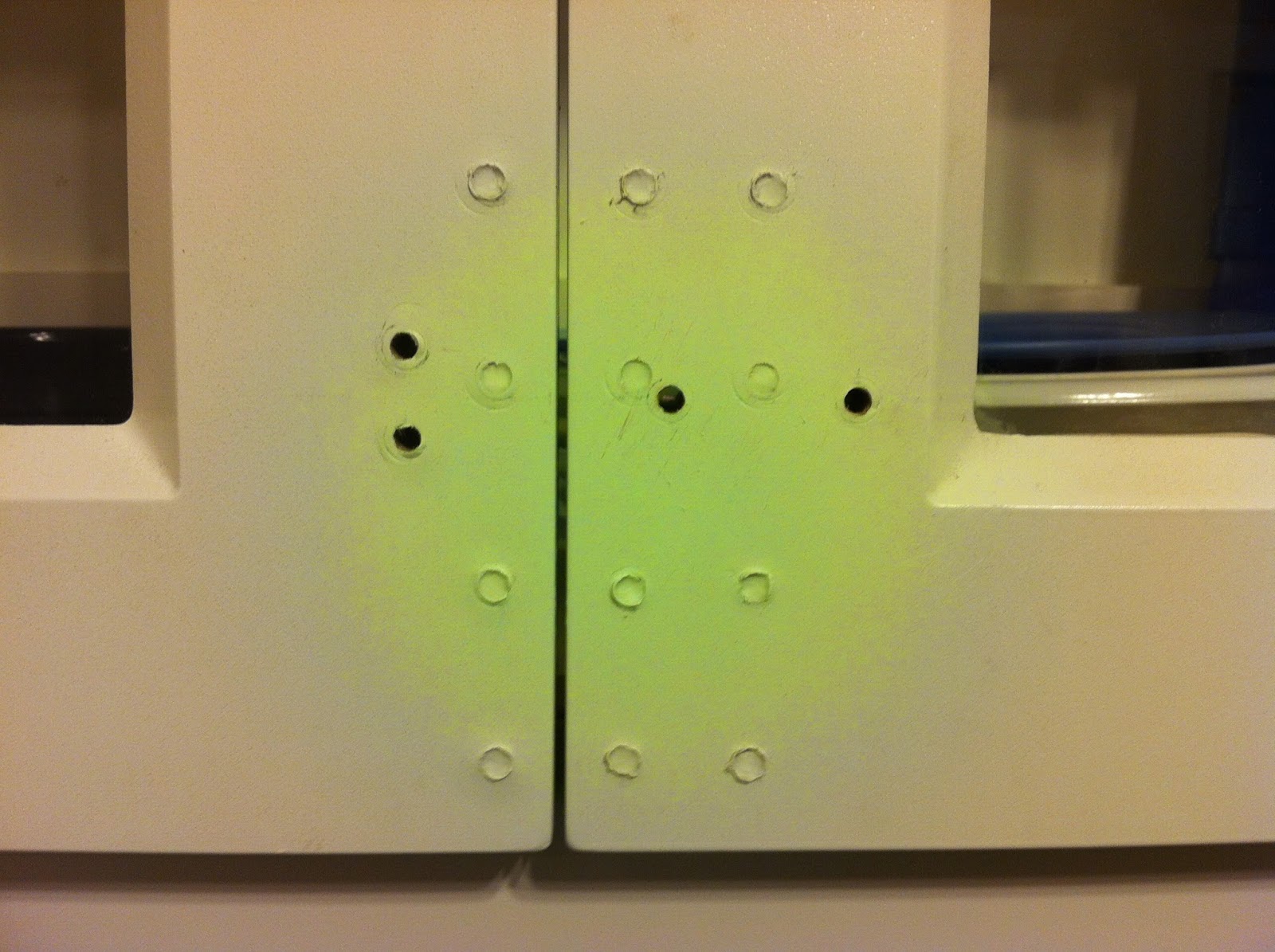 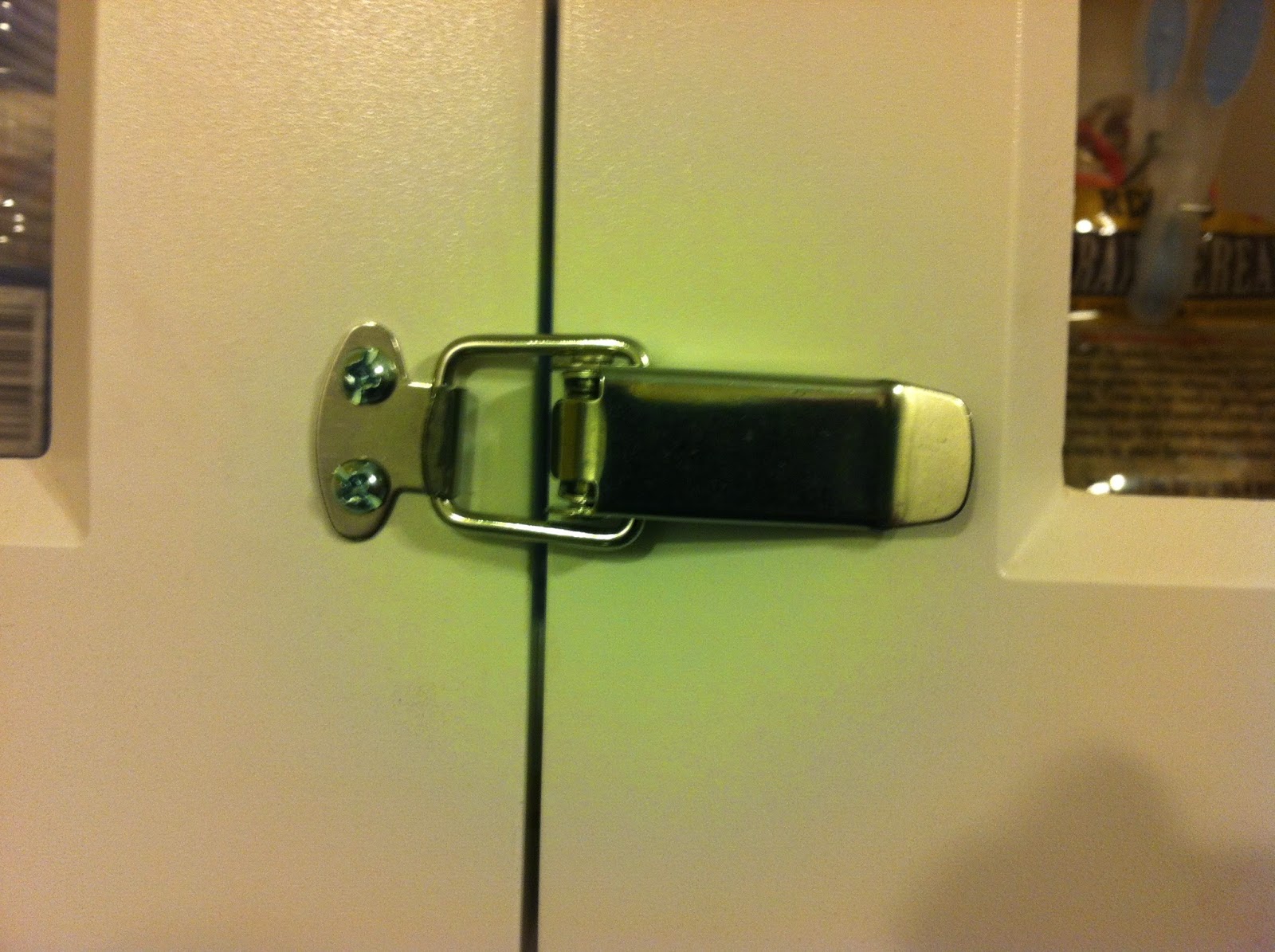 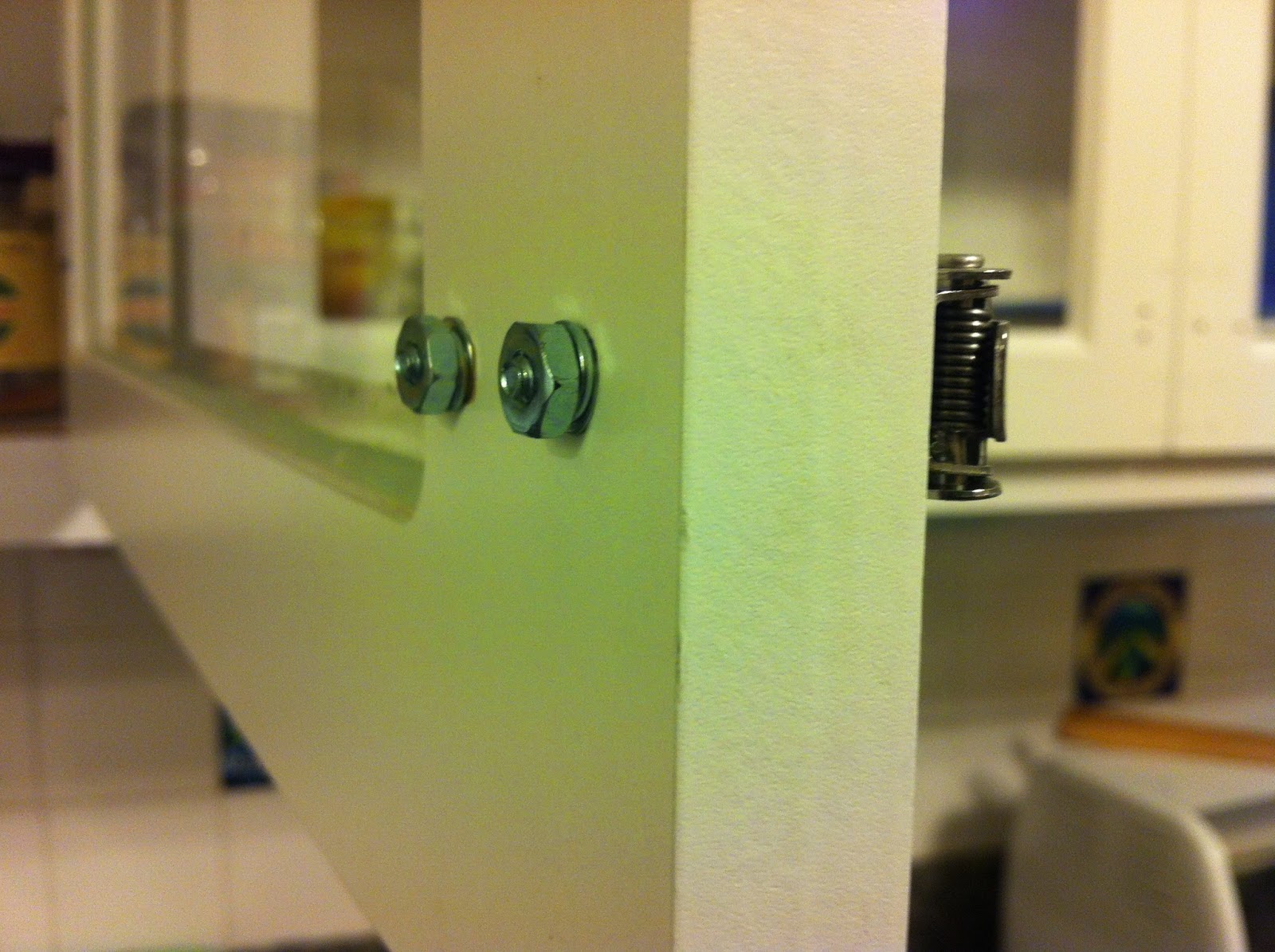 One of my cabinet doors has a bunch of holes in it, and my kitchen is ugly!  But it isn't my fault, I had to drill the holes to keep the cabinets shut. It's The Dumb's fault that they didn't work in the first place. But the San Andreas made me drill the holes to latch the cabinets to keep me safe in the first place...second place.  It's your fault!