I like windows. I hate doors. A case study in door and window retrofitting.

More doors and windows, yay!  Seems like a large portion of my posts are devoted to doors and windows, so I've run out of clever and witty things to say about them.  This post is going to be a fairly dull and straightforward account of how I replaced 5 windows and a door with retrofits and added a new interior door.  However, if you read all the way to the end, I'll describe a "treasure" I found along the way.

Due to the draftiness and poor condition of several windows in my house, I replaced them with retrofits. Additionally, because the back door to the house was poorly installed and not rated for outdoor use, I replaced it at the same time, and I also installed a new door in the interior where one was missing. The windows were easy, but the doors were not.  I like windows. I hate doors.

Most of my house has charming inward-swinging casement windows that I painstakingly restored  and weather sealed (part 1 and part 2) a few years ago.  That's holding up very well, so I'm leaving those alone.  However, the double-hung windows in the kitchen and bathroom were in poor condition and had no particular historical value.  The ropes were broken, and they were very drafty.  Additionally, the window in the laundry room off the kitchen (an enclosed former back porch) and the window in the 1990s-era add-on room were both shoddy aluminum-framed windows, apparently the cheapest possible windows available at the time.  I decided to replace these five windows.

Of course, if you're going to do windows, may as well do some doors, too!  The back door to the house was actually an interior-rated door that someone hacked a pet door into, so it was terrible for drafts and security and warped noticeably whenever it rained.  That needed to go.  Also, there was no door at all between my bedroom and the add-on office room.  I had installed a vinyl accordion door as a temporary measure, but I really wanted something permanent.

Window and door retrofitting did not seem like a do-it-yourself project, so I hired an expert.  I was very happy with my choice, Redlands Door and Supply.  All the staff was very nice, professional, and responsive.  Their sales staff was knowledgeable and patient with all my questions and not pushy or sleazy, and they just felt trustworthy.  The installers were professional and courteous and did an excellent job, although the door guy did not wear safety glasses when I thought he should.

I also got a quote from another company that manufactures its own windows locally and installs them, but I didn't really like the way the windows operated, and the price wasn't any lower than the name-brand windows I ended up purchasing.  I visited another local vendor/installer in town, but I got very bad vibes from their sales staff and didn't pursue that.  But, it seemed like everyone was offering essentially the same options at the same prices anyway.

All about retrofit windows

A "retrofit window" is specifically a replacement window designed to fit within the frame of an existing window, as opposed to one installed by deconstructing the entire window frame or building an entirely new window frame.  Consequently, retrofitting windows is actually a fairly simple and straightforward procedure.  An expert measures the existing window opening, and they custom-order replacement windows from a manufacturer.  When the window arrives, they take out the moving parts of the old window but leave the frame in place. The new window comes in a pre-built frame.  They stick the entire unit into the hole, covering the existing old frame. They nail it in, seal up the gaps with expanding foam, caulk up the cracks, and then put in some new wood trim to make it look finished.  Done!

There are a handful of major window manufacturers that all sell essentially the same thing.  My impression is that there are no bad windows being sold today.  All of them are good and energy efficient because they all have to meet very specific building code standards.  They all come with double-paned, UV-coated glass, most are Energy Star rated, and they're almost all made of vinyl. The experts told me that even 10-15 years ago, there was a much wider range of windows from cheap and horrible to really good. The difference in brands nowadays has to do with how quickly the company responds to warranty repair requests, how smoothly the windows operate, and other very minor things.  I played with several types of windows in the showroom, but they were all essentially the same, and there were no bad choices.  Lacking any reasonable criteria for choosing among them, I went with Simonton because the sales guy recommended them and said they get good service from the company.

I'd been procrastinating on this project for a long time because of the cost.  However, I was pleasantly surprised that retrofit windows were actually far cheaper than I anticipated (<$500/window for the window itself and installation).  That adds up quickly when you're doing a lot, but for some reason I had been thinking thousands per window.

On installation day, the windows went really smoothly.  It took the guys about 3 hours to install all 5 windows.  The only problem was that the glass in one of them had arrived from the factory with a crack in it, so at some point Simonton will come out and replace the glass.  Other than that, it couldn't have been simpler.  I like windows!

Retrofit doors seem to be the exact opposite of retrofit windows.  Most doors today are sold as "pre-hung" doors, which means that they come with a frame around them that just needs to be stuck into an existing door hole.  They also have more standard sizes.  Theoretically, this should make door retrofits easy, but this is not the case for older houses where the door holes aren't necessarily built to receive a pre-hung door frame and where sizes don't match the standards.

Additionally, unlike with windows, there seems to be endless possibilities of door styles, and as a consumer, you have to rely almost entirely on the sales guy at a door company to guide you into picking one.  They have catalogs, but the catalogs don't have prices, and then there are a million options for styles, materials, finishes, and hardware types.  You can't just get a clear picture of what all your options are and balance your desired features with the cost.  You just have to pick something and hope you didn't get ripped off.  Because there are so many choices, they don't have them in the showroom so you can't play around with them.

Also, doors are ridiculously hideously expensive for some reason.  I don't know why. One interior door and one exterior door cost as much as all five windows and took over three times as long to install.

So yeah, installation. The back door should have been simple because it was already a modern pre-hung door, so it should have been easy to remove the old one and put in the new one.  However, we ran into a hiccup.  The existing door was a cheap interior-rated door that should never have been put on the exterior of a house. Whoever installed it also used some interior-rated decorative trim under the door, and this trim had turned into a sponge.  The wood behind that, in the laundry room floor, was partly rotten, and it wasn't clear how bad the problem was.  To really know, you'd have to take out a bunch of floor tiles, and if it was bad enough, possibly replace part of the floor.  All before actually installing the door.

The door guy called his buddy from the shop to look at it, and then they called the boss, who arrived with the former boss (retired).  These four guys, all licensed contractors, picked and poked at it, scraped out some rotten wood, talked it over, and ultimately decided that it was probably okay to leave it as it was.  The soft, rotten part was mostly in one corner, and after scraping that out, the door guy put a hefty piece of weather-resistant material along the edge and sealed it up really well to prevent future water incursions.  Then he put a metal plate in front of it.  I hope that was the right choice, but there's no way to know until the floor falls through or something.

The interior door was a total mess.  There must have been a door there at one point because there was a jamb for one, and the door guy had to remove this jamb to insert the new pre-hung door.  Removing the jamb involved removing the trim, and this got messy and complicated.  The door apparently used to be a window (which makes sense), and whoever converted it to a door had creatively sculpted the bottom part of the door frame (underneath the old window) using several pieces of glued-together scrap wood and drywall mud.  It looked very good from the outside, but it didn't come off easily, and it made lots of dust.  The door guy had to add a bunch of new wood into the wall so he'd have something solid to secure the new door to.  Then he ended up gluing a bunch of stuff together with caulk.  It was kind of terrible, and it needs a bunch of finishing work to make it look decent.  There was a little hole in the plaster wall I had to patch, but luckily I knew how to do that. Last time I dealt with an interior door, it was pretty awful, so hopefully this is the last time.  Yuuuuuuck.  I hate doors. 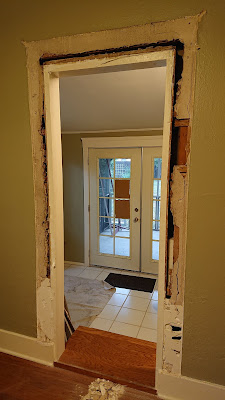 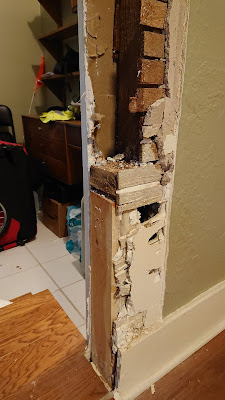 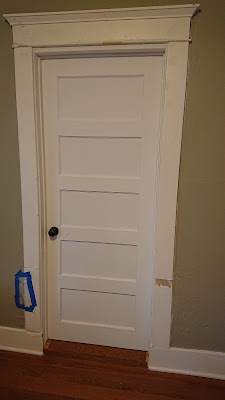 Congratulations if you've suffered all the way through this post.  Now, the promised treasure! When excavating the interior door frame, we found a treasure inside the wall: 1990s-era informational pamphlets about insulation and wall tile from HomeBase, a defunct home improvement company that closed all its stores around 2001-2002 after failing to compete with Home Depot and Lowes.  Yay!!  Isn't that exciting...

Confusingly, HomeBase is not the same thing as Homebase, which is a British chain of home improvement stores that has also struggled with bankruptcy.

I was tempted to add a secret note into the wall myself before we sealed it up again, but in all the chaos of the day, I didn't get around to it. Oh well, next time (except I promise there will never be a next time).
Posted by morangm at 5:40 PM No comments: