Oh, rot! My windows are decaying...

Rot.  "Oh, rot!" is a slang expression meaning "Nonsense!"  Rot is the name of a tributary to the River Danube in Germany and also the name of a village in Sweden.  Unfortunately, it's also something affecting the windows in my house right now.

Recall that my house has charming but slightly weird inward-swinging casement windows.  Although the insides and outsides of these windows have been painted 8000 times, nobody ever bothered to paint the top or bottom of the swinging frame.  Consequently, the wood has been exposed to the elements for 95 years.

At some point, I noticed this fact, particularly that the bottoms of the windows were in pretty bad shape.  I thought I should put a coat of primer paint on them just to keep the protected, but when I started prepping them for that, chunks of wood kind of fell out, and I realized that they needed a lot more attention than a quick coat of primer.  Yay, my windows have dry rot.

True dry rot is caused by fungus that grows in the wood and basically eats it, breaking down its structure.  The wood becomes soft, cracked, and brittle.  I don't know for certain if my windows actually have true dry rot, but they certainly have the symptoms.

So of course I had to fix the windows.  I purchased a handy-dandy dry rot repair kit on Amazon which contained all the necessary ingredients.  The procedure went something like this: 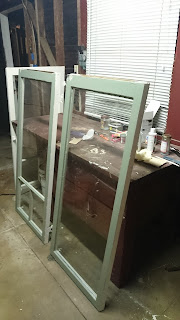 This project has taken me a while.  I got started in July, and I still have 2 of 13 windows to do.  I can do at most three at a time (based on time and space limitations).  Plus, I have to do it when the weather is nice enough for me to remove the windows for a while.  I ended up doing a lot of taking windows down and putting them back up.  Once the wood filler was dry enough, I could put the windows back up to let them set and then take them out again when I was ready to sand and paint.

Another slowdown was the fact that 4 of the windows had stuck hinge pins.  Like the insides and outsides of the windows, the hinges have been painted 8000 times, which is not particularly conducive to operation.  Thankfully, although I procrastinated on the stuck windows for quite a while, they did not turn out to be all that difficult to unstick.  I just squirted them with WD40 and then pried the hinge pins out with a tiny screwdriver.  I wedged the tiny screwdriver under the pin and banged on it with a hammer.  I then cleaned the hinge pins with more WD40 and some steel wool, and I'll lubricate them with something before I put them back permanently.

Ultimately, I'm not sure how much life these windows have left in them.  They are all operational, and I think my repair will hold for some time, but they really need to be refinished and re-puttied, some of them need their hinges reset, plus they are old and drafty.  And they have lead paint on them, which means that refinishing them will be a little complicated.  Is it worth expending this effort, or should I replace them entirely (probably at considerable expense)?  I like their historical charm, but I also like energy efficiency and reliability.  I'm not sure what to do and will have to think about it.
Posted by morangm at 6:16 PM