I have been an appreciator of The Three Stooges for about as long as I have been an appreciator of old houses.  Their slapstick routines hold plenty of appeal for a small child, but their gags have a lot in them for grown-ups, too.  Through their satire and parody of the era in which they performed, you get a fascinating glimpse into what life was like in 1930s and 1940s America.

Widely regarded as one of their best film shorts, "A Plumbing We Will Go" (1940) shows the chaos that ensues when the Three Stooges accidentally end up as plumbers trying to fix a leak in a "high society" house.  Water ends up everywhere, including the electrical system after Moe and Curly hook up some electrical piping to the plumbing system.  When the wealthy homeowner shows off her new television set (a novelty in 1940) to a group of friends, the broadcast of Niagara Falls suddenly turns into a gushing stream of water that bursts through the TV screen and all over the guests.

The Three Stooges - "A Plumbing We Will Go" (1940) from daniel lansing on Vimeo.


A-plumbing I did go the other day, and while I think I'm a bit more of a competent plumber than Moe, Larry, and Curly, I did end up having to call a plumber to get me out of a spot of trouble.

I was a-sitting on the toilet when I heard that ominous sound: "Drip...Drip...Drip"  It was a-coming from the cabinet under the bathroom sink, that darn vanity that I've had so much trouble with.  This time, it wasn't the seal around the edge of the sink.  It was the plumbing.  So I a-took all the stuff out of the cabinet, engaged in advanced geometric maneuvers to take the drawer out, and a-popped out the Dumb false drawer front panel. (I'm very glad I installed those handy little plastic clips on that thing for easy removal.)  There was water all over the place.

The sink has two connections to the water pipes in the wall, one for cold and one for hot.  On both sides, to span the distance between the sink faucet and the water pipe in the wall, two lengths of hose were used, connected by a little threaded hose connector piece, presumably because a single hose wasn't long enough.  On the cold side, that little threaded connector piece was corroded, and the joint between the two lengths of hose was dripping.  Okay, well, that's not too tricky to fix if you're a do-it-yourselfer.

The water shut-off valve for my house is in the front yard (in a straight line from the water meter, which is under a little metal cover next to the street curb).  There's a whole mess of pipes where the shut-off valve is that doesn't make a lot of sense.  Something to do with one of the several old sprinkler systems in the yard.  Later, when I a-showed the shutoff valve location to the plumber, he gave it a puzzled look and said something like "It looks like you have a pretty unique configuration here." 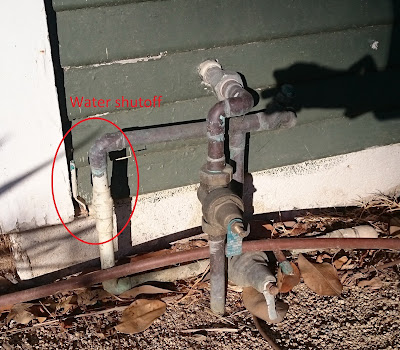 [Trip to Home Depot. Stare blankly at the dizzying array of valves before getting the plumbing expert on staff to point at the right one.  New hose, new connector, new valve...check.]

I a-put in the new hose and threaded brass connector with no problem.  I made sure to wrap the threads with Teflon tape to ensure a good seal.  That part was quick, easy, and effective.

The threaded pipe connector emerging from the wall was in bad shape, so bad that I had trouble getting the new valve to screw into it.  I a-wrapped it in Teflon tape and finally managed to get the valve on, but when I a-tested it, it a-dripped.  I undid it and redid it, and it still a-dripped.  I screwed it on tighter, but it still a-dripped.  Uuuugggghhhhh.  Time to a-call a plumber.

Anthony from All City Plumbing was prompt, polite, competent, and efficient.  He came the day I called at the appointed time, thoroughly explained the problem and what he was going to do to fix it, and fixed it immediately.  Great customer service, especially compared to some other contractors I've dealt with!  (He told me that contracting school does not teach you any business or marketing skills, so there is little wonder that many contractors struggle running a business, no matter how good they are at their trade.)

So what did Anthony have to do?  He took out the valve I had installed, and confirmed that indeed, the threaded connector thingie (called a "nipple") coming from the wall was in bad shape.  He tried to remove it, and it imploded under his wrench.  He couldn't get it out of the 90-degree elbow pipe connector in the wall, so he had to hack apart the wall to remove the 90-degree elbow from the wall pipe.  Even before I called him, I was afraid that this was about to start spiraling out of control.  I was afraid I was going to have to get the house entirely re-plumbed if each successive piece of pipe proved to be corroded.

Thankfully, the pipe in the wall looked to be in excellent condition.  The threads were solid, and it was just the 90-degree elbow and the threaded nipple that needed replacing, and that was done in no time (and at minimal cost...for plumbing work).  Thanks, Anthony!  Now I just have to a-put the wall back together.  Oh joy!


Lesson learned (and, in fact, explicitly stated by the plumber): If you live in an old house, if it ain't broke (or even if it's a little broke), don't fix it.  If the valve doesn't work but it's not actively leaking, it's probably better to just leave it because as soon as you take it off, suddenly your entire plumbing system needs replacing when it would have been okay for a good while yet if you had just a-left it alone.