Molding: My baseboards (not my bread)

Molding/Moulding.  This post is about quarter-round molding/moulding, the little quarter-circle strip of wood that finishes off the place between the floor and the baseboard, to cover up the uneven gap between floorboards and wall and give it a finished look.

Turns out I've always been confused about the difference between "molding" and "moulding".  I thought "molding" meant bread that was growing stuff and "moulding" was your baseboard trim or a frame for shaping something.  However, I just looked it up, and it turns out that they both refer to all kinds of mold.  The extra "u" is just British English: unnecessary, or perhaps classy and sophisticated.  Take your pick.  Take your picke.  Ye olde moulding.

Aside: In Southern California, there is very little mildew (no doubt because there is very little water).  In Mississippi, everything left to its own devices grows mildew, or "mildew butter" as my family calls it.  When I was a very small child (in Mississippi), I had some cooking and food toys.  One of them was some plastic butter on a butter dish which I dubbed "mildew butter" for some reason, probably because I had heard my dad so frequently bemoaning the proliferation of mildew on the exterior of our house.  Ever since, my dad bemoans the proliferation of "mildew butter".

Another aside: Mildew is, technically speaking, a fungus, not a mold.  However, sometimes it is used as a catchall term to describe fungus and mold that grows on plants and wood...just to be confusing.

Final aside: It is no doubt possible, in Mississippi, for your molding to be molding.  That is, your molding could be growing mold.  Or mildew butter.  Whatever.

Anyway, this post is not about mildew or mold, but rather about quarter-round molding and how I finally installed some nearly two years after my floor was refinished.  The old molding wasn't salvageable, as it had to be broken in order to get it off when they sanded down the floors.  I didn't want them to install new molding right away because I wanted to do some work on the baseboards first.  But since the molding is decorative and I had other priorities, this project has proceeded at a glacial pace.  Now, after two years of diddling away, the project is finally done!

Filling the gaps to keep out drafts


When wood flooring is installed, a gap is left between the edges of floorboards and the wall to allow the boards to expand and contract naturally with changes in temperature and humidity.  Unfortunately, this gap can be a source of drafts.  So, in the first stage of my quarter-round molding project, I filled up that little gap between the floorboards and the walls with expanding foam and caulk to keep the drafts out.  My dad had recommended the expanding foam, but it turned out to be overkill, and I had to cut it down a lot where it bubbled out all over the floor.  I guess the gaps are quite a bit larger in his house than they are in mine.  The caulk worked better for me.  Both materials are flexible enough to accommodate the swelling of the floorboards and should handle the worst of the drafts.

Touching up the baseboard paint

The phrase "opening a can of worms" is used to describe something that gets quickly out of control due to unforeseen consequences of doing something simple.  It's most likely a fishing metaphor from the 1950s when fishermen could buy worms as bait in a tin can.  I've never personally opened a can of worms, so I can only suppose that they must quickly start wriggling out of the can after it was opened. However, I have first-hand experience with another metaphor, which I am hereby inventing: "starting to scrape some chipping paint".

Of course, when I went around with a paint scraper to neaten up the paint goo (after first testing for lead and thankfully finding none on the baseboards), all the paint started chipping off.  Of course.  It's never easy, is it?  Big chunks of paint came off revealing a shiny grayish-mustard color underneath.  Whoever painted over the grayish mustard with greenish gray didn't sand down and/or clean the surface adequately, and the greenish gray, with the white coat on top, was just flaking right off.  There's also a pinkish-beige in there somewhere, but I haven't quite figured out where that fits in.  And a dark bluish gray down near the bottom.

I scraped whatever came off but tried to keep it contained.  A complete refinishing isn't something I want to get into right now.  I sanded and cleaned, and then I repainted using the matching white color which the previous owner left for me in the garage.  I really like the white trim.  I guess tastes in color change over time.  I can't imagine wanting to paint my trim in grayish mustard, but maybe it matched the wallpaper...


I originally thought to install the quarter-round molding myself.  It does not seem, in theory, to be very difficult.  You can buy it in long pieces (it's not very expensive), paint it, cut it to size, and then nail it down.  However, I suspect the cutting and fitting is more difficult than it seems, and I don't have a miter saw to cut the appropriate angles for the corners (an electric one being much more efficient than sawing it by hand in a miter box).  The bigger challenge was in nailing it down.  That would be best done with a nail gun.  You can rent those, but you also have to rent the air compressor that produces the pressure to fire the nails.

Finally (after another, er, year), I figured that by the time I rented all that equipment spent a lot of time being frustrated about sawing things to the right length and angle, I may as well just hire some competent professionals.  So, I just called the flooring place that did my floors and had them come back to install the quarter-round molding.  It took them about 3 hours, and they did an okay job.  They certainly did a better job than I would have done, but they didn't do a good enough job to make we want to hire them back.  They didn't do a bad enough job for me to publicly post here who it was.  So yeah, "competent" professionals. 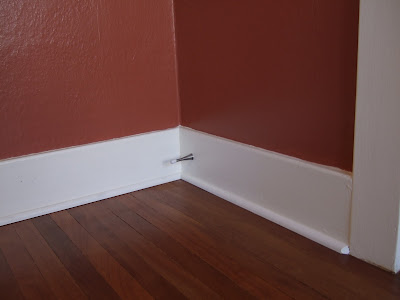 They painted the molding using the paint I provided (the material was pre-primed), cut it to length, angled the corners, and popped it in with a nail gun.  They filled the small gap between the top of the quarter-round and the baseboard with caulk to make it look finished.  I was a bit concerned about that because that will make it harder to get off next time I want to, and leave a gummy line to remove next time I want to refinish the baseboards.  However, I let them do it, since this seems to be the standard practice, and it does look better.  They also left a pretty big gap on the bottom side where the quarter-round molding hits the floor.  I think the floor surface underneath was probably kind of uneven around the edges, so that no doubt contributed, but they probably could have made it tighter if they had been so inclined.  Oh, and although they knew they were going to be painting the molding, they forgot to bring any brushes and had to use mine.

The part that really irked me was that they left some scratches in the floor.  One of the workers was wearing knee pads to protect his knees while crawling around.  He kind of scooted around on the floor while wearing these hard plastic knee pads, and he left scratches in the beautiful finish he himself had helped to apply not quite two years ago.  After weighing the discomfort of a confrontation with them about it and getting them to come back and fix it (while I babysat them) against the trouble of just fixing the minor scratches myself, I've decided to just fix the scratches myself.  Fixing minor scratches in a wood floor will be the subject of a later post.

Lesson learned: watch your workers carefully, and speak up if you need to.  If I had been smarter, I would have seen what was happening and made him strap some towels onto his knee pads.
Posted by morangm at 6:52 PM