Tiles have been used for thousands of years in walls and floors and ceilings and roofs.  Elaborate tilework has long been a fixture of Islamic buildings, and the Moors brought it with them to Spain in the Middle Ages, after which it spread across Europe.  For many years, tiles were used in palaces, churches, and the homes of the wealthy.

Advances in manufacturing during the Industrial Revolution (in ceramics, glazing, and in industrial procedures) made tiles cheap and readily available through mass production, and with middle class people seeking to emulate their wealthier counterparts, tile became a widespread in houses.  In Victorian days, they were commonly used as a decorative fixture in hallways and foyers and on fireplaces.  Tile also became a standard feature of Arts & Crafts style houses, despite the Arts & Crafts movement's attempt to counter the Victorian style's overly-decorated look.  True Arts & Crafts tiles would have been hand-made and hand-decorated rather than mass-produced, but no doubt middle class builders of Arts & Crafts houses would have cheated a little.


But tile wasn't purely a decorative item. The Victorian era also gave rise to an increased focus on sanitation.  Tile was used in kitchens and bathrooms (after those were invented), and eventually in other public spaces, like subway stations, because it is durable and easy to maintain and very easy to keep clean. The glaze prevents water and goo from soaking in, and you can just spray or wipe it down without damaging it.

I have no idea what my kitchen originally looked like (it was completely redone sometime around 2000), but it could very well have looked like one of the kitchens in this interesting Flikr album featuring kitchens with tiled walls and counters.  One of my neighbors has a blue and yellow tiled counter top like the ones pictured here, and the bathroom in my old 1930s-vintage apartment just around the corner from my house had rather startling red and yellow tiling that took me a while to get used to.

At any rate, when my kitchen was redone, wall tile was included above the counters and behind the stove.  It's mostly plain white square tile, but a few special tiles were thrown in showing printed "vintage" Redlands citrus grower logos and advertisements.  It looks like you can order them from Zazzle, and perhaps they're available from local tile sellers, too. 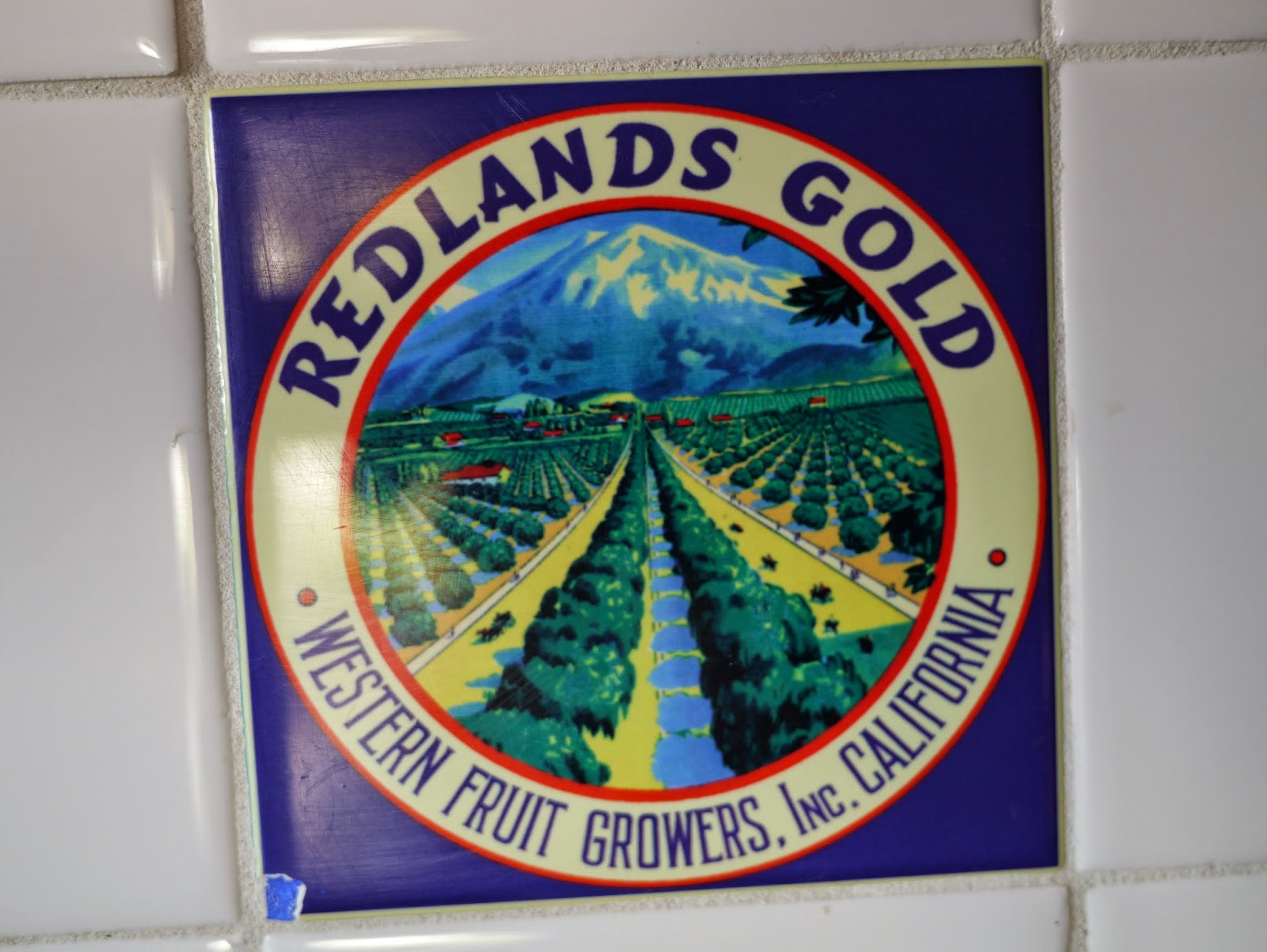 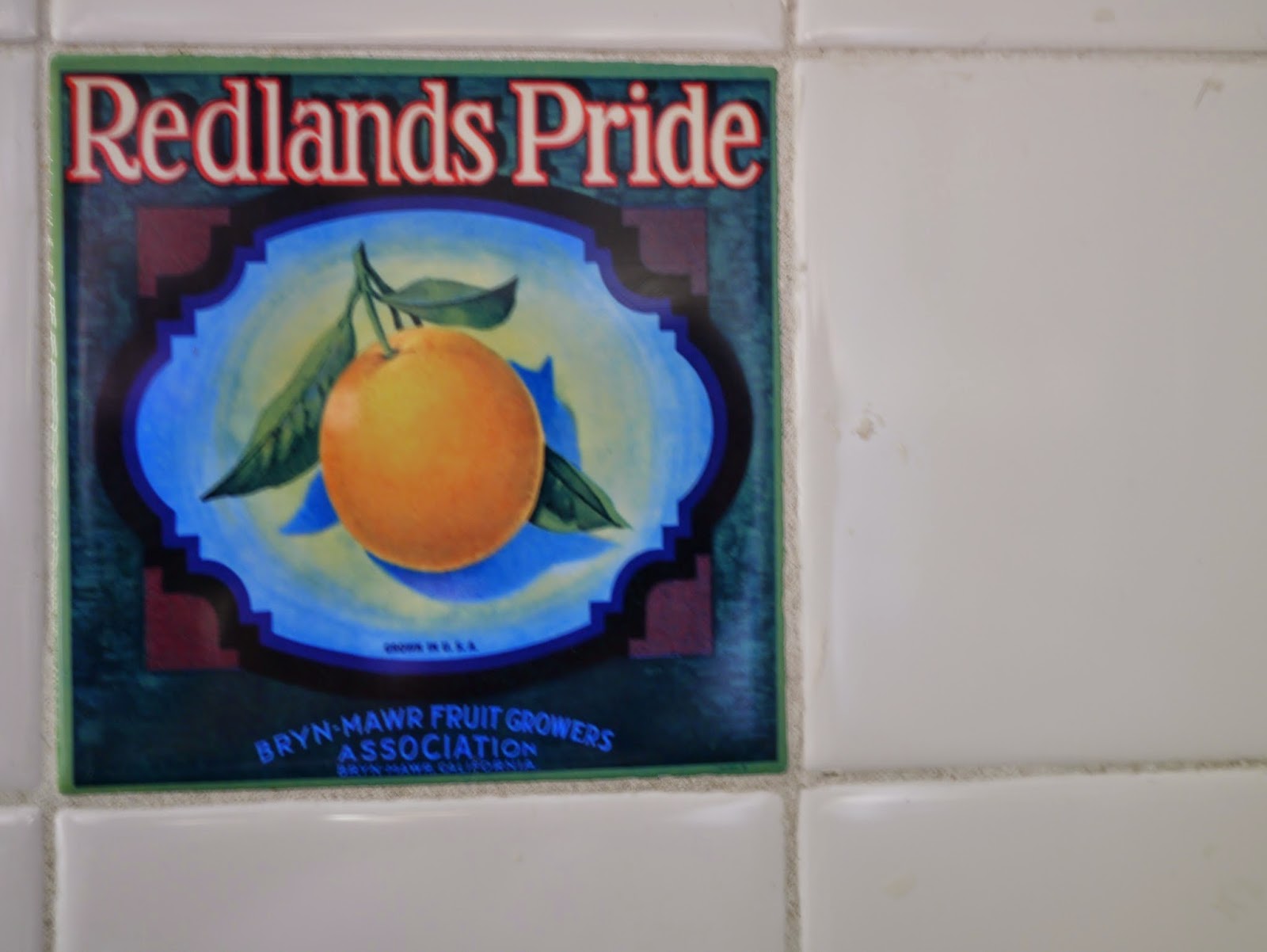 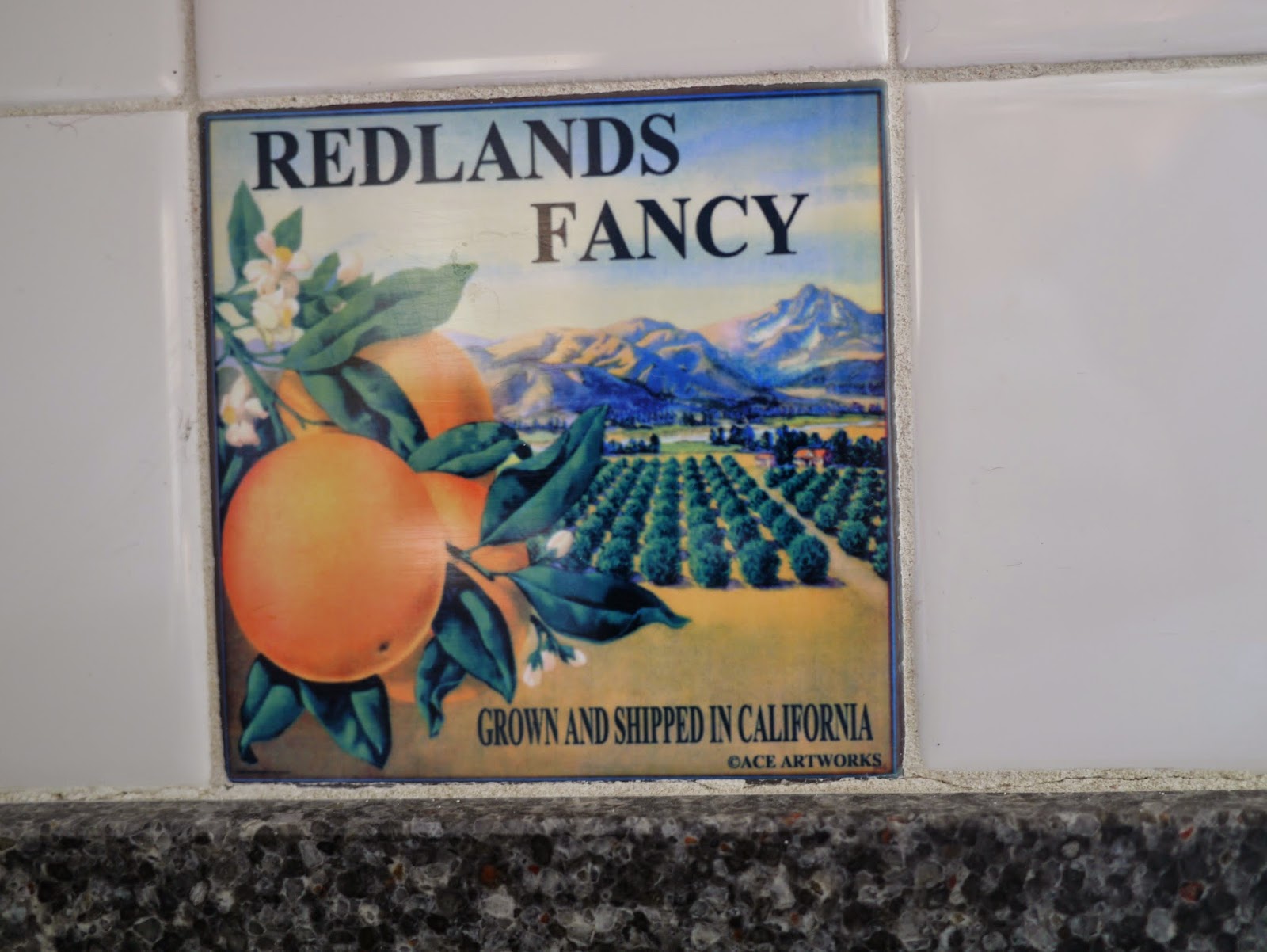 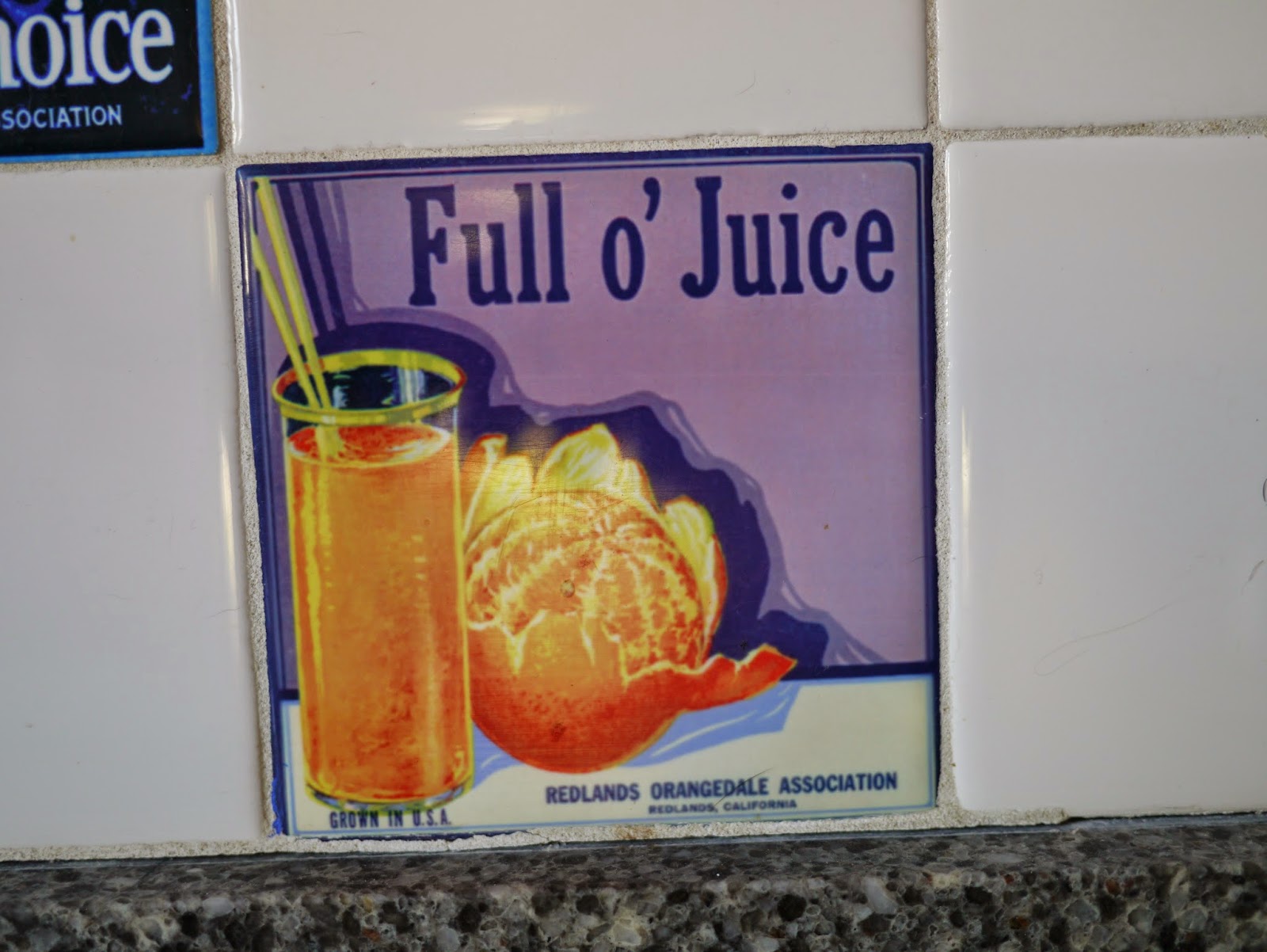 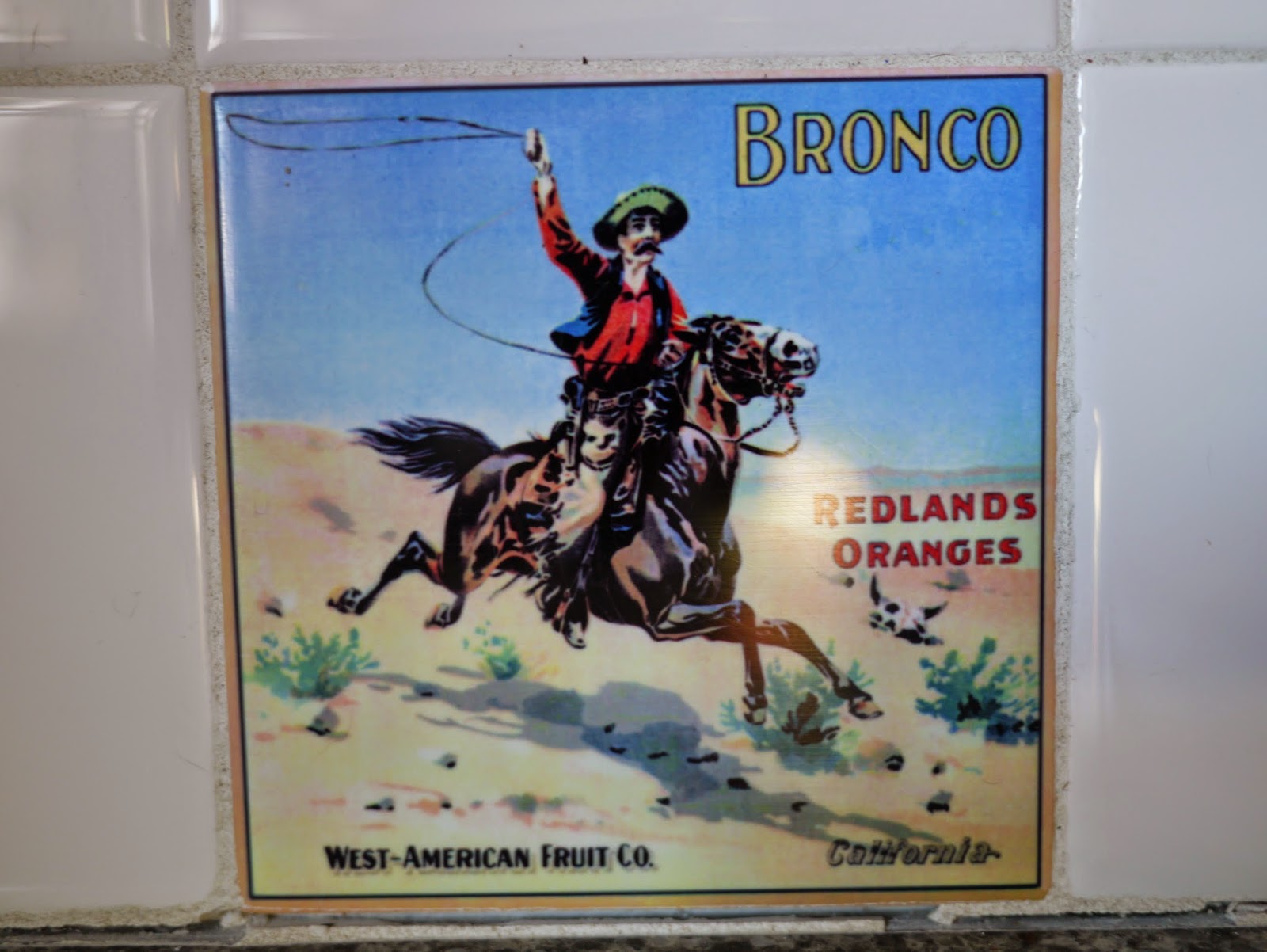 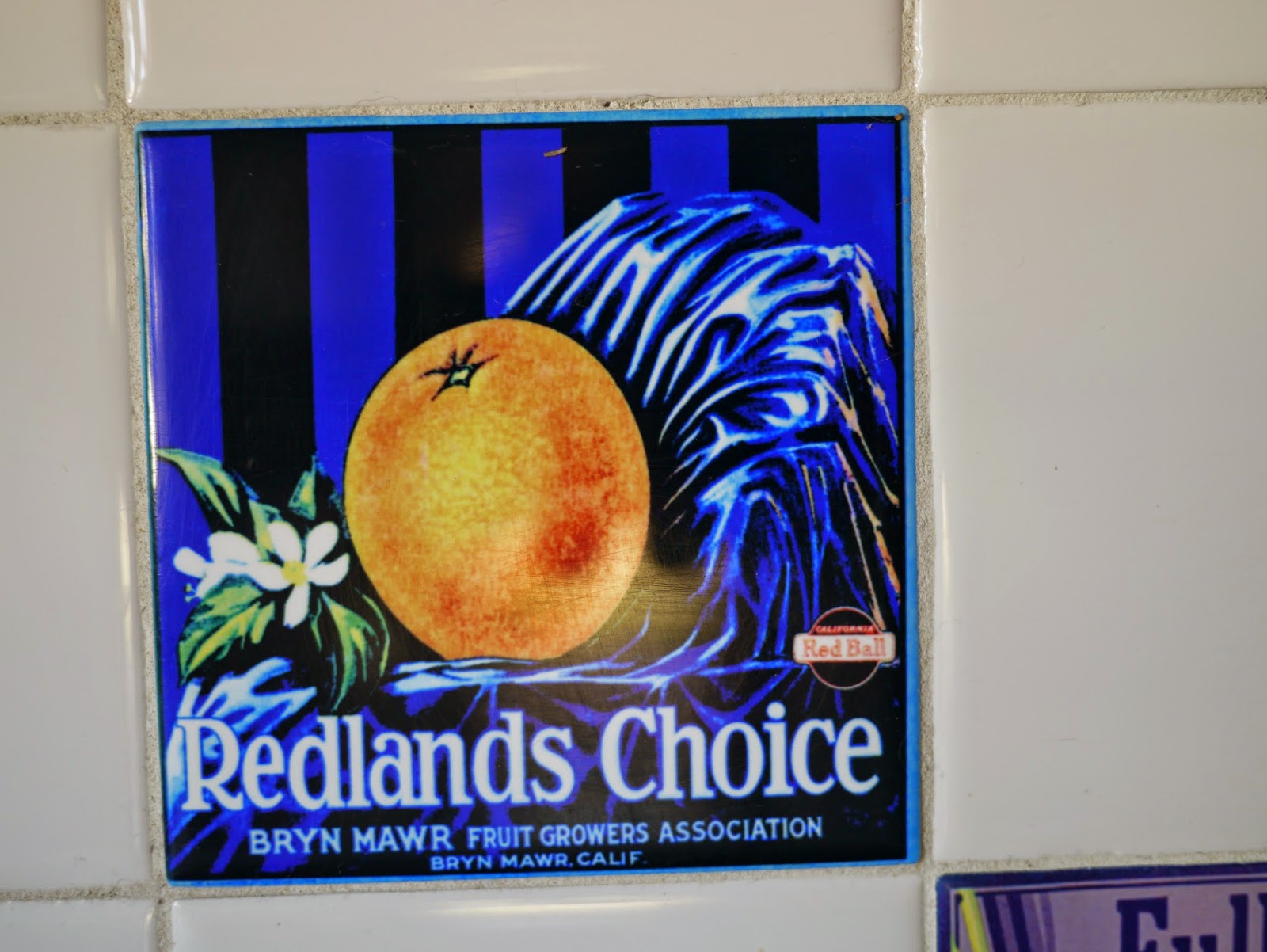 When I bought my house, there was a built-in combination microwave/stove vent fan in the kitchen over the stove.  Since it neither microwaved nor vented effectively, I replaced it with a real vent fan.  When the old microwave was there, you couldn't see the top of the tiled area behind the stove because it was covered up by the microwave.  However, the stove vent fan doesn't come down as low, so you could see the place where the tile stopped.  Although I cleaned up the wall area nicely before installing the fan and gave it a fresh coat of paint, the tile was never neatly trimmed.  So, I decided to finish up the edge with some nice-looking quarter-round tile that matches the quarter-round in other parts of the kitchen.

This project actually went very smoothly and quickly.  I didn't even have to cut the tile or align it because it fit perfectly.  Also, I lucked out at Home Depot and found a little bucket of combination adhesive/grout that was really easy to apply and easy to clean up.  I stuck the tiles to the wall, waited a day until it was set, and then filled in the cracks with the same stuff.  Easy-peasy, no problem.  Then I had to paint the edge of the wall to finish it off.  It looks nice.  It looks like it's always been that way.

However, I learned that I don't enjoy working with tiles.  I kind of hate grouting.  Aside from filling a little hole in the corner of the bathroom floor with grout (which doesn't count), I don't think I've grouted anything since an art class I went to when I was about 11 years old in which we decorated flower pots with pottery shards and lots of grout.  Incidentally, that wasn't an art class I enjoyed very much.  Remind me not to ever tile an entire wall in a kitchen or bathroom by myself.  Blech!  Also, remind me not to ever become a mosaic artist.