As you might recall from my previous post about Wiring and The Dumb, I had my house rewired immediately after I bought it.  The electricians had to cut some small holes in the wall in order to run the new wires.  I have now (finally) successfully patched those wall holes.

Prior to the popularization of drywall in the 1950s, interior walls were made of lath and plaster.  The
lath (thin wood slats) formed the wall, and the plaster was placed onto the lath. The plaster kind of oozed between the cracks in the lath, and when it hardened, the oozed part helped hold the whole thing up. 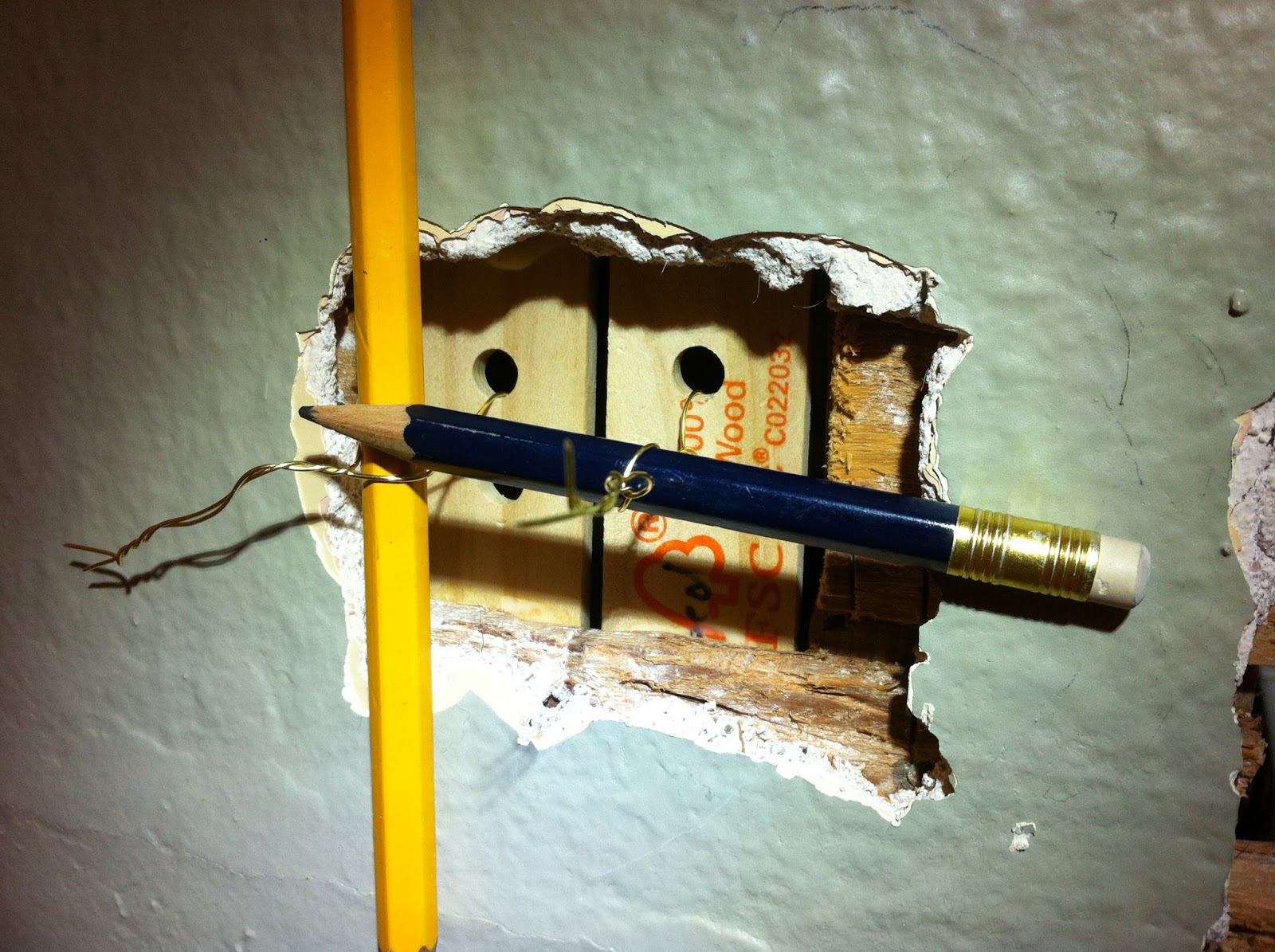 You need to put a backing behind the hole so you have something for the plaster to stick to.  They make special screen material for this purpose, or you can do what I did and just use some paint stirrers and glue them in as a sort of artificial lath.  Home Depot and Lowes give away paint stirrers for free (yay!).  I cut the paint stirrers to the correct sizes for each of the holes.  I even wrote my name and the date on them in case anyone deconstructs the wall at some point and bothers to notice the patches.  I drilled two little holes in each of the sticks.  This was to help me hold them in place while I was gluing them to the inside of the walls.  I set them into place on the wall's interior surface with some wood glue where they were to join the real lath, threaded some brass wire through the holes, and tied off the brass wire around some pencils to hold them in place while the glue dried.  It worked very well, and the wood glue dried quickly and very solidly.

When all the holes had their backing, I had to do the plaster.  At the recommendation of the guys at Home Depot, I went with Rapid Set® OnePass® Wall Repair and Joint Compound.  This stuff was pretty easy to work with.  You just mix it with water (trying not to breath in too much of the dry powder, which isn't good for you), and then daub it into the holes with a trowel.  I didn't have a lot of luck with my trowels.  I think my trowel work needs some practice.  The holes were kind of deep, and I found that the plaster would sag at the bottom of the hole and hollow out at the top, so I had to do two coats to get it flush with the surface all around.  For mixing this stuff, up, an old aluminum pot worked really well because the chemical didn't eat it, and if you don't use all the plaster, it will harden and then break off, so you can reuse the pot (obviously not for cooking).

The OnePass package claimed it would dry in 20 minutes, but I wasn't convinced that it was really, fully dry until the next day.  It didn't matter anyway because I procrastinated another month or so before I got around to doing a second coat and then sanding it down.  At least the holes were plugged. They had been contributing massively to cold air drafts.   But, after applying a second coat, I sanded them down to get them truly flush with the wall surfaces.  A power sander was invaluable here.  It would have taken me ages to do it by hand.  Wear a dust mask, and be ready to spend a lot of time cleaning up dust afterwards.

After the sanding was done and I wiped up all the dust, I prime painted the new surfaces.  Note: Don't use the disposable spongy paint brushes with shellac-based primer because it's so watery that the spongy brushes just swell up and become useless.


The next step (when I get inspired) will be to do the top coat of paint.  I don't know the exact paint colors, so I will have to see if they can be matched.  Stay tuned for a post about paint color matching technology at some point.

Oh, and there are still some holes in my closet and bathroom ceilings that I have to fix, but that's a project for another day.