The Windows (More about weather sealing)

I read somewhere that the reason Medieval cities were laid out with such twisty roads in a seemingly disorganized fashion (rather than, say, a grid system) was so that the buildings would act as a wind buffer.  The cold wind would get dampened a bit when all the buildings were in an irregular clump, which was no doubt something of a comfort to the tenants whose windows had wood shutters but no glass.  Brrr!

My city is laid out in a grid system, but my windows thankfully have glass in them.  Nevertheless, my house is drafty, thanks in large part to the cracks around the edges of the windows, and I'm just naturally cold all the time.  I probably would have been a frozen corpsicle back in Medieval days.

To reduce the draftiness problem, a while back, I weather sealed my weird old-fashioned inward-swinging casement windows using compressible bulb seal weather stripping.  This project was highly successful, and I really couldn't have been happier with the results. 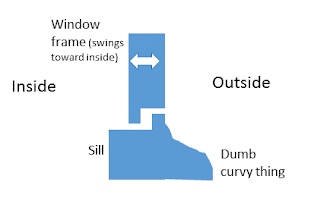 BUT, I was only able to seal the top and sides of the windows.  I couldn't install the compressible bulb seal the same way along the bottom because of some decorative trim and awkward geometry.

The window swings shut against a thin stop, and the exterior side is curvy.  There was just no way to put the compressible bulb seal flange on the outside in a way that would fit.

I tried a bunch of different things, and nothing worked.  First, I tried nail-on bulb seal.  It was hard to install, and sometimes it didn't fit in the crack under the window, so my windows wouldn't shut.  Additionally, it didn't actually seal that well.  I could feel air still leaking around it.  So that was a failed attempt.

Then I decided I needed something thinner.  I bought some stick-on squishable silicone wedge-shaped stuff from Home Depot, but that still wasn't thin enough.  I bought some even thinner stuff from Amazon, and this seemed to work.  It was about as thin as possible when compressed, so it mostly fit in the tiny crack under the windows and seemed to make a good seal.  I was happy enough with the test window that I did it for all the windows.
BUT, after a couple of months, it was all unsticking from the windows, and some of it was tearing where the window bottoms rubbed over it too hard when opening and shutting.  In short, it didn't work after all.

It's kind of like a door sweep.  Actually, I thought about installing door sweeps, but door sweeps are meant to drape over a raised threshold in order to get a good seal, which I don't have on my windows.  So instead, I'm trying this instead.

This really isn't the intended use of the product, and I don't know how long it will hold up with continued opening and shutting of the windows, which cause the silicone bulb to rub against the sill.   But, the bulb part is easily replaceable without even removing the flange, so maybe it doesn't matter if I have to get new bulbs every few years.

I tested the seal by placing a box fan right outside the window and blowing air right at it.  I couldn't feel the artificial draft from the inside, so I think it's working.  We shall see.
Posted by morangm at 9:29 AM