Chickens, lizards, and spiders, oh my!

My house has a detached garage.  When the termite inspectors looked over the house before I purchased it, they found a small active termite infestation in the garage (luckily nothing in the main house), so I need to get that taken care of soon.  However, at some point in the past, somebody tacked up a bunch of mismatched pieces of thin paneling on the interior garage walls.  Behind the paneling was a bunch of Styrofoam, meticulously cut to fit between the support beams.  I guess this was supposed to be insulation, but it was a nasty mess, full of bee nests, spider egg sacks, and who knows what else.  The person I bought the house from told me that someone in the past used to keep chickens in the garage, so maybe the attempt at insulation was for the chickens.  I decided I should pull all of this out, since I'm not storing chickens in the garage, and since it might be covering up more patches of termite infestation.


My parents have an old house in Mississippi, and I had commented to my dad earlier in the day that I might find all sorts of weird things in the garage, but, unlike Mississippi, at least I probably wouldn't find any snakes in there.  But, of course, what was the first thing I found?

Actually, thankfully, it wasn't a snake.  It was a large and rather mangy-looking lizard, but I definitely did a double-take when I first saw it.  When wild animals feel threatened, they go through a few phases of response.  First is Plan A.  Plan A involves sitting very still and pretending that you're not there, hopefully convincing that predator that you actually aren't there.  If that fails, the animal resorts to Plan B.  Plan B involves remaining where you are but showing your teeth, hopefully convincing the predator that you are dangerous.  Failing that, the animal resorts to Plan C, which is to run away.  My garage lizard tried Plan A for a while, but I stopped staring at it, and it never had to get to Plan B or Plan C.  It eventually lurked away into the shadows when it thought I wasn't looking anymore.

Someone had nailed a bottle cap to the wall that said "I've often thought of becoming a lizard."  Maybe they finally did it!

The mish-mash of paneling came down easily.  I was going to remove the nails, but the paneling just sort of ripped off over the nails with very little cajoling.  I will have to figure out how to dispose of it.  I pulled out all the Styrofoam and filled up 6 large garbage bags with it.  The whole process was very dirty.  My decision to cover up in long pants, long sleeves, safety glasses, work gloves, and a dust mask was a good one. 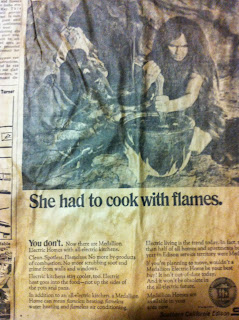 Elsewhere in the garage, I removed a random wooden rod that was dangling from the ceiling and some disintegrating newspapers that were lining some of the shelves.  They were Redlands Daily Facts papers from January 23, 1970, and featured updates from Vietnam and an explanation of azalea blooming habits.  It also included this large ad from Southern California Edison for all-electric houses featuring a cavewoman.  I guess electric stoves and climate control are a large improvement over the, um, fire pits and caves that most people in Redlands were using in 1970.

My forays into the deep dark recesses also rewarded me with two cardboard boxes full of papers belonging to a previous owner (not the one I bought it from), including school transcripts and medical bills.  I haven't quite figured out what I should do with those yet.
Posted by morangm at 11:25 PM