Why fridges stink (and the bottoms of cabinet doors are dirty)

My mom is here visiting me, and today we set to work cleaning the kitchen.  It wasn't too bad, but there was the usual slime and stickiness that comes with years of food preparation.

The refrigerator smells.  It's empty, and I've been airing it out for a week, but it still smells gross.

Smell is caused by something giving off molecules and by those molecules ending up in your nose.  Molecules from that object actually float through the air and end up in your nose.  How gross is that!?  Yummy, I'm inhaling somebody else's old rotten food particles!!  Smelly molecules are generally light, volatile chemicals that easily get blown off their material of origin.  Items made of non-volatile materials (like a hunk of metal) don't smell because they don't give off any gases. 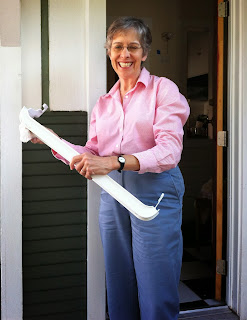 Fridges stink because food gives off a lot of volatile chemicals.  Moisture comes out of food and floats around the fridge, which is a pretty air-tight area.  It's especially bad when the food stays in there long enough to rot or spoil.  It builds up and in there and sticks to the walls and the racks.  When you open the door, all the air rushes out and slams into you.  You inhale it.  Yay.

The back of your nasal cavity has millions of olfactory receptor neurons that each have little cilia on them with receptor proteins which bind with the smelly molecules in the air.  The neurons transmit a signal to the brain.  Different receptors are sensitive to different types of molecules, and the combination of firing neurons is distinct for different types of smells.  Personally, I think smelly fridges all tend to smell similarly gross.  Maybe the diet of most people I'm around is similar enough that their fridges are full of pretty much the same stuff.

When a smell is present for a long time, the brain experiences habituation.  It ignores the constant stimulation and only alerts you to new changes.  I guess if I lived in the fridge (or my whole house smelled like fridge), it wouldn't bother me.  But when you first open the fridge and get doused with it, your brain just goes "Eeeew, gross!"

My mom thoroughly scrubbed down all the surfaces inside the fridge.  Tomorrow, we're going to check underneath it.  There should be a drip pan somewhere designed to catch condensation which might be full of dirty, smelly water.
Posted by morangm at 8:47 PM