How ever green your branches!


I've been hard at work on a bunch of house chores and improvements, but none of them are in a complete enough state for a blog post yet.  However, I did manage to accomplish one task just for fun.  I made a Christmas tree in my front yard.

The origin of the Christmas tree seems to be somewhat lost to history.  Evergreens were used in Egypt, Rome, and elsewhere long before the advent of Christianity for celebrations of the winter solstice, a reminder that life would return again in springtime.  The tradition of actually putting an evergreen tree inside with decorations on it seems to have started in 15th or 16th century Germany and Livonia (now Latvia and Estonia).  I read somewhere that the tradition started in guild halls, and the guildsmen would decorate the tree with sweets for the apprentices to eat.  Elsewhere, I read that it began as a piece of scenery in Renaissance-era plays, where an evergreen tree decorated with fruit was used to symbolize the Garden of Eden.  Or, alternatively, the Edenesque "Paradise Tree" was used during the Middle Ages to celebrate the feast of Adam and Eve on December 24 and subsequently became associated with Christmas also.

This tradition eventually was adopted by bourgeois families, who put trees in their homes.  Although Christmas trees were originally decorated with edible sweets, at some point, for some reason, people started lighting them with candles.  At the time, people commonly decorated pyramid-shaped wooden shelves with candles and ornaments for Christmas, so perhaps the two traditions merged, and they started putting candles in trees.  There are some nonsense stories about Martin Luther himself being inspired by the twinkling stars or shimmering snow and then recreating it for his children by putting candles in his Christmas tree at home.  That's probably not historically accurate, but the legend does show how people associated the Christmas tree with Protestantism.  It was sort of a Protestant counterpart to the nativity scenes common in Catholic Christmas celebrations.

People in Redlands go all out with holiday decorations.  At Halloween-time, some people in my neighborhood turned their house's front facade and yard into a shrine to outer space. The front of the house was draped in black with stars and planets all over it. There was a huge lit-up Saturn emerging from the roof, a giant rocket in the yard, and a 12-ft-tall robot with moving arms waving at the trick-or-treaters.  A different house nearby has this over-the-top shrine to inflatables in the yard this Christmas.  Their lawn is also made of AstroTurf, which cracks me up.  Actually, most of the Christmas displays around here are pretty tasteful.  Spectacular, even. 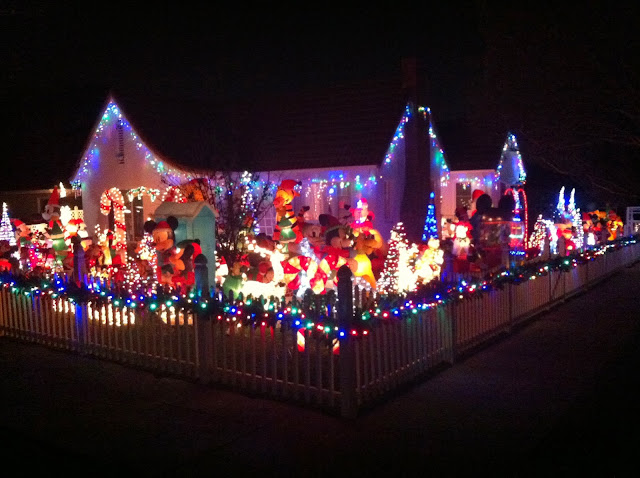 I've never been one to decorate or celebrate holidays much.  However, in the spirit of fitting in with the community, I decided to do a bit of tasteful and understated Christmas tree decorations of my own.  My house has a young deodar cedar tree growing in the front yard which the previous owner transplanted from somewhere in the mountains.  Deodar cedars grow to be enormous (like 150 feet tall), but mine is only about 12 feet tall and looks like a rather spindly Christmas tree.  Consequently, this year it will have to put up with being dressed up as one.  I recruited several neighbors to help me put a strand of lights on the tree.  While the kids made "volcanoes" from the gravel in my xeriscaped yard, the adults stood around on top of ladders trying to figure out how to attach the strand of lights to the top of a 12-ft tall tree that none of us could reach.  Eventually, we used a fruit picker on a pole to bend the top of the tree down so we could loop the lights over it, and then we were able to wrap the lights around the tree successfully. 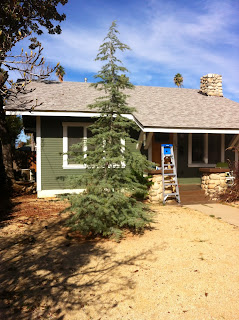 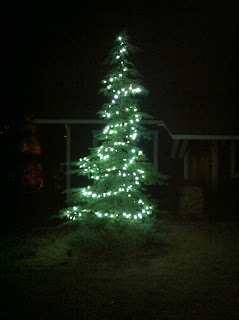 For the lights, I chose a brand new strand of blue-white LED lights with crystal-like globes.  They use very little power, and are probably much less likely to burn down the neighborhood than the candles our German and Livonian ancestors used.  Actually, putting candles in a tree inside your house seems like a pretty dumb idea to me.
Posted by morangm at 10:11 PM