Plumbum - all about lead paint


Well, I'm finally officially moved into my house and out of my apartment.  But, moving isn't very interesting to write about, so this post is going to be about lead paint.

Lead is a ubiquitous heavy metal element that also happens to be poisonous.  When ingested, lead is a neurotoxin that accumulates in soft tissue and bones.  Lead poisoning can manifest in a wide variety of physical and mental symptoms.  It is especially problematic for children, as it can lead to developmental disorders and learning disabilities.

However, lead has been used for a huge variety of things throughout the ages, probably because it's just really easy to find and work with.  It was very popular with the ancient Romans.  This graph of world lead production from Wikipedia shows a huge spike during the Roman era.
Remember the lead pipe in the board game Clue? Lead was used for water pipes throughout history, including in Ancient Rome (where they actually had plumbing). Toxic water pipes.  Actually, the word plumbing derives from the Latin word for lead, plumbum.  Lead is Pb on the periodic table, which stands for plumbum.

Pewter is a metal alloy that was commonly used in tableware in Europe among the wealthy before advances in glass-making and porcelain superseded it. The pewter tableware used in Medieval Europe had a high lead content. When acidic foods like tomatoes, which had just been introduced to Europe from America, were put on the pewter plates, the lead leached into the food, leading to lead poisoning.  For this reason, and because tomato plants are a member of the generally-poisonous Nightshade family, wealthy Europeans thought tomatoes were poisonous.

A lead mixture was added to gasoline from the 1920s-1970s to reduce engine knocking, but it was phased out in the US because of the environmental and health problems associated with it.  Lead is/was also used in ammunition, solder, batteries, radiation shielding, and other industrial applications.

But, as I said, this post is about lead paint.  According to Wikipedia, "lead is added to paint to speed up drying, increase durability, maintain a fresh appearance, and resist moisture that causes corrosion."  So it does lot of good things for paint.  But, primarily, you can create a very nice thick white pigment with it.  Japanese geishas used face-whitening makeup that contained lead-based pigment, which, needless to say, wasn't good for them.  People have speculated that artists such as Van Gogh and Caravaggio suffered from lead poisoning from the paints they used.

Lead paint was used on walls and trim in houses, and with an old house like mine, it's not uncommon for there to be layers of lead paint underneath the most recent coat.  It doesn't really do any harm unless it's actively chipping off where a child might eat it or if it's in an area like a window where it gets rubbed off and turned to dust that you might breath in.  Or, of course, if you decide to repaint it and you sand it down or scrape it off.  My house doesn't need repainting right now, but I wanted to see if and where I had lead paint just so I know what I'll be getting myself into next time I do decide to paint. 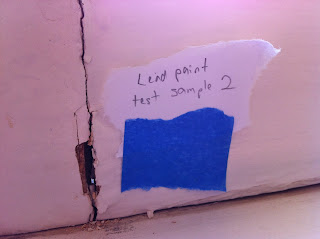 I bought a lead paint test kit at Home Depot.  The kit contains some tools to help you collect a sample of paint (basically you just scrape off a little bit of paint with a razor blade) and some vials with chemicals that change color depending on the lead content of the sample.  You put the sample in the vial with the first chemical, and then you drop in some of the second chemical and shake it around.  If it turns dark, there was lead in the sample.  If it stays clear, there was no lead. 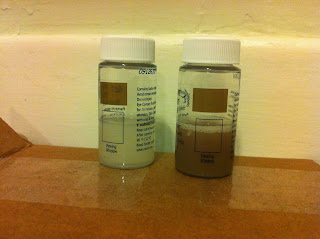 I took a few samples and followed the instructions, and all my samples were clear.  The kit also contained some verification strips, to test the viability of the chemicals.  I followed the instructions for that, too, but it appeared that the second chemical was bad.  I looked at the expiration date on the test kit box, and it had expired a year and a half ago.  Thanks, Home Depot.  The test kit company had a number you could call, and they mailed me a fresh bottle of the second chemical.  I was able to add it to the samples I had already collected.  Voila!  My window hardware and walls were free of lead, but the window frame definitely has lead.

This wasn't unexpected, and I'll just deal with it when I have to and make sure not to eat my window frames in the mean time.  My windows swing inwards rather than sliding up and down, so they're less likely to produce lead dust.
Posted by morangm at 10:01 PM