Oh, show me the way to the next whiskey bar. (About my mahogany floors)


I had my hardwood floors refinished last weekend.  Hooray!  That means I can finally move in.  The floors were in good shape but were pretty scratched up and desperately needed to be sanded down and varnished.  They look so nice now that I'm almost afraid to walk on them.

The floor guys took off the quarter-round molding that covers the edge of the floor where it meets the baseboards.  The cracks between the floor and the wall are where a lot of drafts come in, so I vacuumed out the cracks and will fill them with expanding foam.  Then I'll put some new quarter-round molding down.  There's also a hole in the living room floor with an old gas floor heater in it that was used before the central heat was installed in the 90s.  If I had been smarter and a bit more on my game, I would have had the floor heater removed and had the floor guys patch the hole when they did the refinishing, but I wasn't on top of things enough to get that done.  Oh well.  A project for another time.


The floor people's best guess for the type of wood used in my floor is mahogany.  Mahogany is a hardwood tree native to Central and South America and the Caribbean Islands.  Actually, there are a few different species of Mahogany.  Today, the Honduran or big-leaf mahogany is the only commercially-grown species.  The West Indian mahogany was widely traded and used prior to World War II, but today it is an endangered species because of centuries of overharvesting.  Illegal logging of West India mahogany is still very common in South America today.

Deforestation has occurred throughout human history. People chop down trees to clear land for farming or settlements and to provide fuel for fires for cooking, heat, and industry.  The Europeans chopped down tons of trees in the 1400s to build wooden sailing ships for exploration and colonization, and, later, American steamboat crews chopped down all the trees along the banks of the Mississippi and other rivers to power the boats.  Mahogany was used to construct Spanish sailing ships, fine furniture, and musical instruments.  And wood floors, apparently.  I guess the builders of my house were guilty of contributing to deforestation, but at least the material has lasted well.  Better than chopping down a forest for something you're going to use for a short time and then throw away.  Or something you're just going to burn. 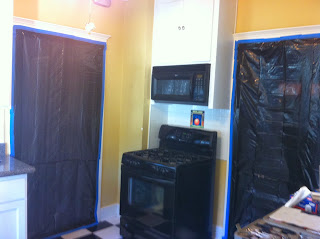 That's all for now.  In truth, I'm kind of exhausted from spending several hours vacuuming up wood dust.  At least I was smart enough to tape plastic over the doors to the rooms that don't have wood floors to keep the dust out.

I leave you with something completely unrelated with a sort of homophonic name, Kurt Weill's Mahagonny Songspiel.  If you're up for it, he also wrote a 2.5-hour-long opera called Aufstieg und Fall der Stadt Mahagonny (Rise and Fall of the City of Mahagonny). "Oh, show me the way to the next whiskey bar."