Wiring and The Dumb

Although various primitive light-bulb-like objects were created throughout the 19th century, it wasn't until the 1880s that the light bulb started to get commercialized.  Edison's first light-bulb patent was in 1878, so there really wasn't much point in putting electricity in your house before that.  But, with the advent of the electric light bulb, people needed to have electricity delivered to all the rooms in their houses.

From the 1880s up until the 1930s, knob-and-tube wiring was the standard for electrical wiring in houses.  Knob-and-tube wiring consists of conducting wires that run along floor and wall joists and insulated ceramic tubes that hold the wire free of those joists.

Although a lot of old houses still use it, knob-and-tube wiring is widely considered a fire hazard these days, especially given the rather larger loads we put on our electrical systems compared to our ancestors in the 1920s. Also, the wires were supposed to remain suspended in air to keep them cool, but that doesn't work if there's insulation in the walls (insulation is a more modern practice).  The technology wasn't bad.  It's just outdated because we use electricity differently now than we did back then.

My house was built in 1920, and most of the wiring in it was the original knob-and-tube stuff.  Because of the fire risk, as I was annoyed to find out, none of the major insurance companies will write new policies for houses with knob-and-tube wiring.  Without insurance, you can't get a home loan.  In order to get an insurance policy for my house, I had to agree to rewire it as soon as I moved in.  Yay.  So, after a week of work and mucho $$, the electricians just finished rewiring everything and bringing it up to code.  Incidentally, if you're looking for an electrician in Redlands, I was very happy with Redlands Electrical Services.

Of course, when you start taking things apart, you discover all sorts of mysteries.  When the electricians took the ceiling fixtures down, they discovered that all of them were simply screwed into the plaster and not anchored to the ceiling joists.  Plaster is crumbly and not very strong, so that's kind of a terrible thing to do.  Next time you pull your fan's speed adjustment chain, you might pull the whole fan right out of the ceiling.

Speaking of fans, the electricians also installed two ceiling fans in the rooms that didn't have them (a housecooling gift from my parents).  However, according to the 1996 inspection report I found in the garage, all the rooms had ceiling fans, so two of them disappeared sometime between 1996 and 2013.  Weird.  Well, maybe not so weird.  There probably weren't enough wires going into the ceiling to have both a light and a fan, and somebody opted for lights instead. 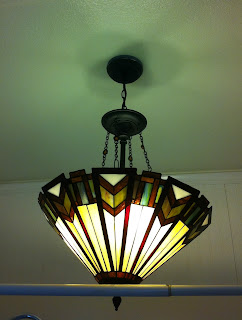 The electricians also installed a bathroom vent fan and light.  It lacks historical charm but will cut down on future mildew.  It's certainly an improvement over the large incongruous Tiffany chandelier that was above the shower when I bought the place.  Why that was there remains a mystery.

Speaking of lamps, I wanted to get some lights to put on the ceiling fans.  Light kits are readily available and have standard attachments for fans of any brand, so I didn't think it would be hard.  Unfortunately, for whatever reason, the latest trend is for fan light kits to use candelabra sized bulbs instead of the standard size.  I didn't want that, and it took an annoying amount of time to find what I wanted.  The descriptions you find of these things online and the packaging you see in stores often doesn't say what size bulb it uses.  There exists and all-pervading force in the Universe called The Dumb which constantly seeks to exert itself.  It very commonly manifests in computer programs and mass-manufactured products, and it seems that fan light kits have recently succumbed to The Dumb.

So I got my light kits installed, and the electricians put in some special switches that allow for fan speed control from the wall.  Unfortunately, these fixtures also had light dimmer switches.  Incandescent light bulbs are 1880s technology, just like the old knob-and-tube wiring.  CFL bulbs are much more efficient, so naturally that's what I want to use.  But, although you can dim an incandescent light bulb, you can't dim an ordinary CFL, only the dimmable kind.  No matter what I did with the light dimmer switches, I couldn't get the CFLs to not flicker or buzz.  The annoyance factor outweighed the convenience of having fan speed control from the wall, so I had the electricians replace the fancy dimmers with ordinary standard switches. I'll control my fan speed by pulling the chains, and now that the fans are anchored to the ceiling joists, I don't have to worry about them falling on my head when I do that.  My electricians put the ceiling fixtures back correctly, thus reducing the amount of Dumb in the Universe slightly.

If someone would just make a light switch unit that has a 4-speed fan control slider and a light on-off switch, that's really all I wanted.  It doesn't seem that complicated, really.  The fact that it doesn't exist is another manifestation of The Dumb.  If you know of such a product, please leave a link in the comments.
Posted by morangm at 9:08 PM