This is California.  We have no water.  Saving water at home is a good thing.

To save water when you take a shower, you should turn off the water when you're soaping up, and only turn it back on when you're ready to rinse.  I do this.  However, one thing that particularly annoys me and also wastes a lot of time and water is getting the water back to the correct temperature when you have to adjust two knobs.  I already did that once, and now I have to do it again!?

Shower valves to the rescue!  I got some cheap standard-sized valves on Amazon which allow me to turn the flow on and off right at the shower head, thus keeping the temperature mix correct for when I'm ready to rinse.  They only took about 5 minutes to install (one of which went onto my not-actually-British-male shower hose), and they work great! 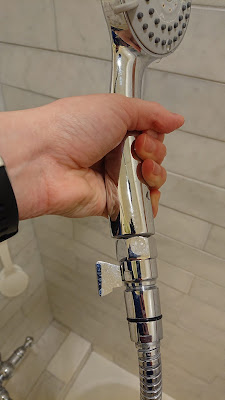 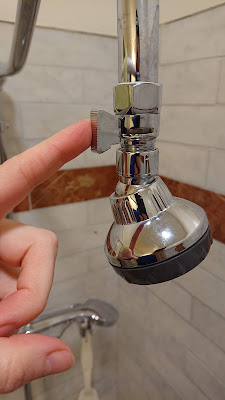 Thinking about water flow puts me in the mind of our local urban water feature, the Mill Creek Zanja.  "Zanja", correctly pronounced "Zahn-hah", is a Spanish word meaning "ditch".  Our zanja was dug in 1819 to provide irrigation water to farms in the Redlands area long before Redlands was even Redlands and before the United States even owned California (hence why the zanja has a Spanish name).  Over the years, though, American settlers moved in, people stopped speaking Spanish here regularly, and people who didn't know better started misspelling it and saying it wrong, and it became known and the Sankey.  Some people still call it that, even though there are plenty of Spanish speakers here again who could tell you better.

Anyway, the Mill Creek Zanja cuts through the center of Redlands, and the City and some local advocacy groups have been working on developing a nice greenway along it on the east and west ends of town.  However, the zanja kind of disappears downtown.  It was covered over at some point and runs under the core downtown and dead mall, eventually reemerging next to State Street as it heads toward the Esri campus.

I was at a public meeting a while back where some planners floated the idea of diverting part of the zanja downtown and creating a linear park along it, thus connecting the greenways on both sides and creating a bike/pedestrian corridor through town.  I actually really liked the idea in principle, although it seemed to be lacking in the practicality department.  I mean, it would require a monumental amount of money and extensive care to keep it from being full of trash and to keep the landscaping actually looking nice.  Plus, it normally doesn't even have much water in it, so it would be more like a vaguely damp ditch most of the time rather than an aesthetically pleasing stream.  Finally, the existing underground channel would have to stay because the diverted portion wouldn't be able to handle the necessary capacity during flooding events, or something complicated like that. The city council apparently came to the same conclusion I did and said definitely not, so the zanja will remain covered downtown.

I'm guessing the planners at that meeting were inspired by the famous (among planning circles) Cheonggyecheon stream restoration project in Seoul, South Korea.  The stream was very important to Seoul throughout the centuries, but after the Korean War, it became very polluted and the site of lots of homeless encampments, so they covered it over with a highway.  In the early 2000s, they removed the highway and restored the stream into a very pleasant public park.

The stream begins with a fountain and a little artificial waterfall right in the city center and then travels in a nicely-landscaped concrete channel for several miles before emptying into the Han River. Either the historic water source of the stream was always intermittent, or else it's been too disrupted by other construction (of the metro and such) to provide adequate water for the stream now, so Han River water is actually pumped to supply the stream water.  It's fantastic as a park, and it's beautiful, but its ecological value is debatable.  It's certainly not "natural", but it's also probably a lot better than a highway.

Redlands, unfortunately, doesn't have the natural or financial resources that Seoul does, so a local zanja version of the Cheonggyecheon project is out for us.  I mean, Seoul is the center of a metropolitan area of 25 million people, and it also has a wet climate, so the stream actually has water in it.  Actually having water is a helpful characteristic for an urban water feature.

This brings us back to saving water.  I highly encourage you to get some shower valves of your own.  You can also collect your shower warm-up water in a bucket and use it to flush the toilet!  I get one free flush per shower.
Posted by morangm at 9:47 PM