In the half year since I started thinking about doing something with my yard, I've learned A LOT.  The Russian sages I planted in July are thriving as expected, the tam juniper is still alive but not really doing anything, and I completely revised my strategy for gardening.

My main challenge in the past was lack of data and information.  I had no idea what plants to plant or how to care for them, and I couldn't seem to figure out how to get that information.  The local nurseries were unhelpful, and I also didn't have much luck scouting plants growing in natural areas because I couldn't identify them and didn't know enough about the care they would need or what size they would grow to.

However, over the summer, I finally hit the jackpot and found the resource I've been missing: the Inland Valley Garden Planner website from the Chino Basin Water Conservation District.  They have a database of plants well suited to growing in the Inland Empire, and, most importantly, a plant finder that allows you to filter by different characteristics, like "shrubs" or "partial shade" or "low water" or "attracts butterflies" or "California native".  There is a detailed page about each plant with information about what care it needs, how big it gets, exactly how much you should water it during each month of the year, etc.  Each plant has several photos showing what it looks like when it's mature.  This website is incredible.  It's seriously one of the best websites I've ever used.

Additionally, the Chino Basin Water Conservation District has an education center in Montclair.  It's a really amazing place!  They have a demonstration garden, a grove of trees of different sorts, and a large classroom where they teach workshops.  I attended a workshop about native plants, in which an extremely knowledgeable and enthusiastic landscape architect went through about 35 different native plants that are most likely to be successful for novice gardeners in the Inland Empire.  I talked to him afterward and asked him to answer a long list of dumb questions.  My main one was "is it crazy not to irrigate and to try to do a garden without an irrigation system?"  He said no, it's not crazy, and gave me a shortlist of plants to pick from.  This is exactly what I've been needing since forever.  Later, I attended a follow-up workshop about how to actually plant and maintain stuff, like practical gardening for dummies.

Here are the plants I decided on (all California natives):

Armed with actual data and a list of plants, I made a plan. I decided to focus on just one section of the backyard (it was too much to do the whole thing at once), the area behind the garage adjacent to the section of fence that was replaced over the summer.  That area was basically just dirt and empty space, and I decided my goal was just to take up space and cover surface area so it won't kick up dust in the summer and need mowing in the winter.

I laid out my design in ArcGIS Pro (the software I help develop at work).  I rendered some basic plant shapes in 3D using the typical mature height and width of each plant type so I could get a sense of the spacing. 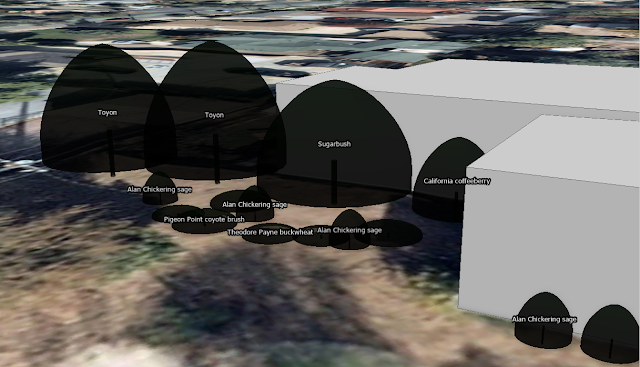 Then I sourced the plants.  I noticed that there is a complete disconnect between the plants recommended by the plant finder website and the plants actually available at the local nursery.  I called several nurseries, and most of them had 0 of the 7 plant species I chose for my yard.  I asked one nursery why they don't sell those plants, and they said "We don't sell them because they don't tolerate the watering in yards with irrigation systems."  Eventually, I found 2 of my plants at Adam Hall Nursery in Moreno Valley at comparatively lower prices, and the rest I special ordered from Moosa Creek Nursery, a wholesale specialist in California native plants that delivers to Parkview Nursery in Riverside, half an hour away from me.

This disconnect translates to the plants I see around town in people's yards.  I've seen almost none of my chosen plants in person, and the plants I do see in local yards aren't in the plant finder website database because they're not well suited to the environment here. Despite our climate and years of drought, people here irrigate a lot.  We have created an entirely made-up ecosystem that is only sustainable through continued irrigation, and if drought continues and population continues to increase, it seems inevitable that we'll have to change pretty much the entire ecosystem we live in within the city.

Plants finally acquired, I ordered a truckload of mulch.  Is this a Chinese dump?  No, not yet.  We'll get to that story eventually.

I hired a guy to spread the mulch and do the planting.  I had saved up a bunch of recycled newspapers to lay down under the mulch as a cheap and temporary weedcloth.  Since the weed cloth in the front yard deteriorated so quickly, I didn't think it was worth the cost and effort to get any real weed cloth.  I figure with newspaper and a layer of mulch, I should be able to go a year or two without mowing the mulched area before the weeds start to come through again, and by then my plants will be starting to take up space.  Maybe?  Hopefully.  I ended up with more mulch than I actually needed, so my guy put some in the front yard too, on top of the weeds.  Maybe it will help a little.

And, best yet, I should only need to water them weekly for the first year while they get established, and then only once a month over the summer and occasionally throughout the rest of the year if it's been dry.  No irrigation system, minimal maintenance. 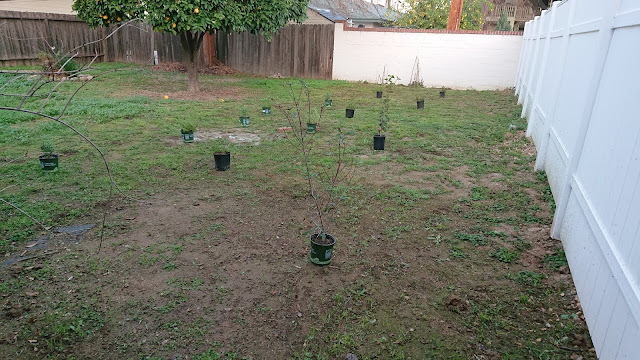 So I have plants!  Doesn't look like much yet, but check back in a few years. 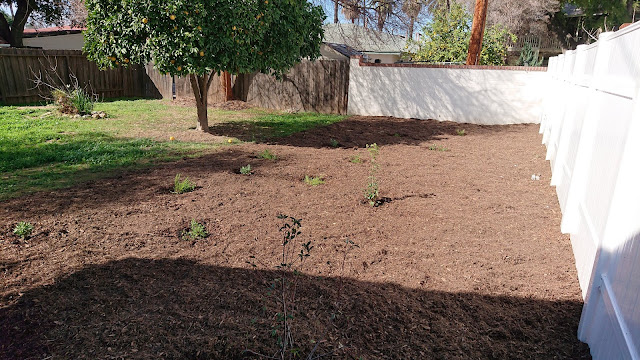 Now, finally, we're done with native plants, and we can talk about Chinese dumps.  Ironically, the same day I got a big load of brown and smelly mulch dumped in my driveway, my spam message queue in my work e-mail had two messages with a subject line of "Happy Chinese New Year - 75% OFF on all Dumps" from mei at chinesedumps dot com.  Teehee.  Chinese dumps.  Best spam message ever.  No, I don't know what kind of "Dumps" these messages were referring to, but I think it's better to use your imagination than to visit the website.

Update after about three months, in which we had plenty of rain: 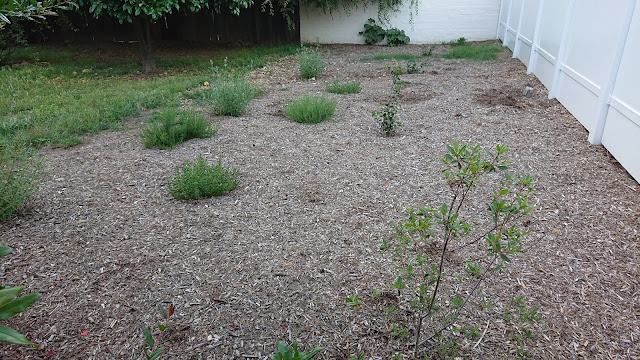 The sages and buckwheat in particular are growing like crazy.
Posted by morangm at 10:24 PM