Just like most people these last few months, I've been spending a lot of time at home thanks to the Coronavirus lockdown.  Somewhat on a whim, I decided to finally embark on a bit of creative destruction that I'd been considering for a long time.  I decided to remove the dingy old screens from the porch on the back of the house.

But wait, is it a porch?  Or a patio?  Or was it a porch and now it's a patio?  According to the Oxford Dictionary of English, a porch is "a covered shelter projecting in front of the entrance to a building", but I typically think of a porch as being raised off the ground.  A patio is "a paved outdoor area adjoining a house", but I typically think of a patio as being uncovered.  It seems not to quite fit the Platonic ideals of porchness or pationess, but I'm not feeling particularly pedantic today, so let's just say it used to be a porch, and now it's a covered patio and not worry too much about it. 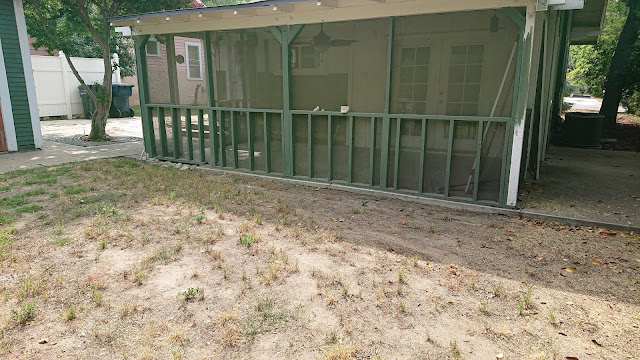 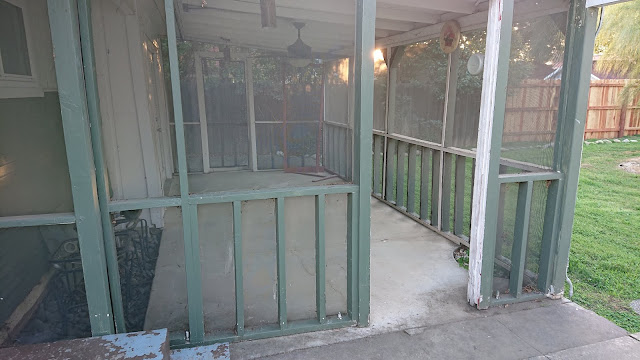 It wasn't awful, but it was kind of dark and dingy, and it was always dusty and full of spider webs.  We don't really have that many bugs here, and the doors had kind of fallen apart a long time ago anyway.  I never used this space for anything, and I felt like it made the house even more disconnected from the backyard than it was anyway thanks to the add-on room.  Basically the space just didn't work for me.

So, one evening I starting pulling down screens.  It came right down with no problem, and most of the non-supportive wood beams were just nailed in and came right out as well with some prodding from a claw hammer.  Some of it was a little rotten...hooray.  I only had to break out the jigsaw to make a few strategic cuts.

You can see how nicely the space now connects with the backyard! 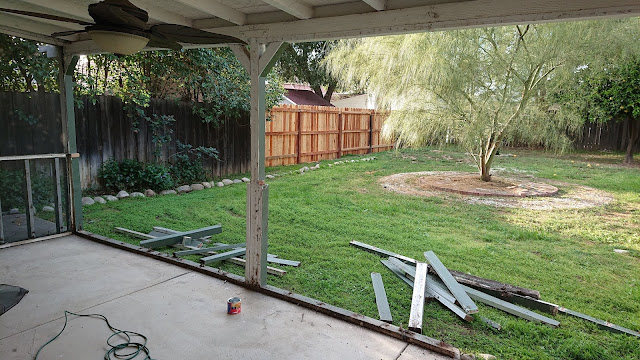 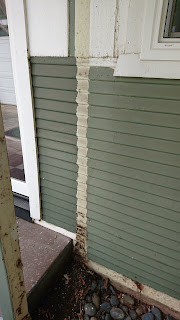 After removing all the detritus and pulling out about a thousand staples and rusty nails, I needed to do some touch-up painting.  If you refer back to the first picture, you'll see that some previous painter suffered a fit of indecision on the right-most column, started painting it green, and then kind of gave up.  I'll probably never know why.  Other areas now had exposed wood with no paint, and there was a gross and dirty stripe on the wall where the a beam had previously covered the siding.

One curious puzzle: The house's exterior siding is a dark green color, and there's a slightly lighter green used for accents around the windows and on the underside of the roof overhang.  For some reason, a previous painter had used this lighter green for the siding inside the porch (to the right in the photo), but the adjoining siding that was on the outside of the porch (to the left in the photo) was the darker green of the rest of the house.  I wanted to repaint the ugly stripe, but the two greens didn't match.  I decided to go with the lighter green and paint over the smaller darker green area so it would match the entire wall, rather than repainting the much larger section with the wrong green. 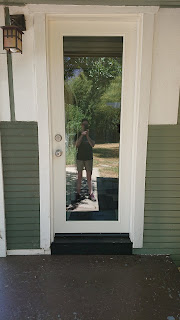 As a result the paint colors to the left and right of the back door now do not match. Can you tell?  The neighbor child (an 8-year-old) stopped by to examine my work one day (he was being good about social distancing), and he didn't notice. Even after I explained this paint color conundrum to him and pointed it out explicitly, he still could not tell the difference between the two sides, so I guess it passes the test.  You can kind of see it in the photo here, but I bet you wouldn't notice if you hadn't been told.  (But wow, doesn't that new door look nice even a year after it was installed?)

So here's what it looks like now after removing the screens and decorative wood, repainting strategic areas, and cleaning thoroughly.  I've been doing my weekly now-virtual tap dancing class out there. (Of course, I said I didn't need the screens because we don't really have bugs, and I've now been thoroughly bitten up by mosquitoes...) 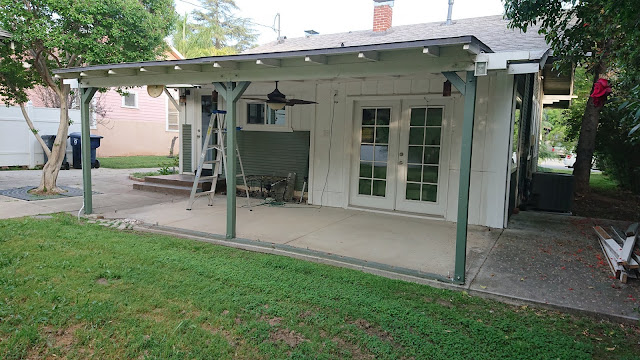 It's not 100% done.  There are still some bolts sticking out of the concrete that I cannot remove myself.  There are also some horizontal wood boards along the edge that I want to get rid of, but I dare not touch them because they go under the support beams for the roof.  I will need to hire somebody with more skill than me to either carefully cut the wood or to replace it with fresh timber because it's a little rotten.

I also want to get a comfy porch swing now that I have a place to put it.  I need to get rid of this pile of wood, too.  The neighbor cat agrees. 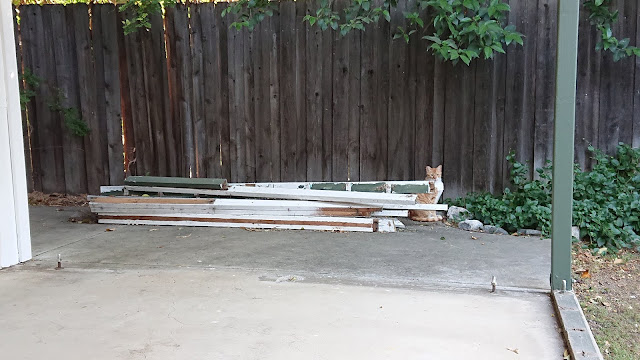