I've been working from home since the Coronavirus lockdown started.  This is the, um, 11th week, I think?  I've lost track. Anyway, the first month or so, it was delightfully gloomy and rainy outside, and I really enjoyed my home office setup in the living room where I could look out the window and watch the rain and the birds and the neighborhood activity.  However, once the spring rains ended and the sky returned to its usual blue and the sun returned to its usual excruciating SoCal brightness, I found that I could not keep the blinds open during the daytime without giving myself eye strain.  It was just too bright outside.  Plus, I was reminded how strongly the sun beats down on morning side of the house.

My new windows and door, since they are modern, have double panes and a UV and heat-reflecting film on them of some sort.  However, the living room still has its historically-charming original inward-swinging casement windows, which I painstakingly restored and weather sealed several years ago.  The glass, of course, is just a single pane of plain glass.  In fact, they have the historical wavy window glass that resulted from older manufacturing techniques.  They used to manufacture window glass in large cylindrical tubes which then had to be reheated, flattened, and cut to size, complete with waves, bubbles, and other imperfections.  Historical purists really love this stuff, although I'm not quite sure why.  I find it kind of charming, but although I'm mostly ambivalent about it, I would sort of rather have an unobstructed view and be able to look at birds through the window with my binoculars.  However, I'm not about to replace all the casement windows in the house anytime soon.

But, to continue working comfortably from home as the summer glare and heat increases, I needed to do something.  So, I bought some heat and UV-resistant window film that you can install on existing windows.  It's the Gila Heat Control Titanium Window Film, which I ordered from Home Depot along with an installation kit.  A lot of reviewers said they had a lot of trouble installing it, but I found the process to be very easy as long as I followed the steps shown in their how-to video and used the provided tools.  Basically you just thoroughly squirt the window and the film with their soap-like bonding chemical and then iron out the bubbles with a squeegee and trim the edges.

The photo below shows the front windows. The left one has the film installed, and the right one does not (yet).  You can see it makes a huge difference.  It's like having sunglasses on the window!  When the sun is actively hitting a window with the film on it, I can really tell a difference in how much heat is coming through.  And my eye strain problems are now gone.  I can keep the blinds open during the work day. 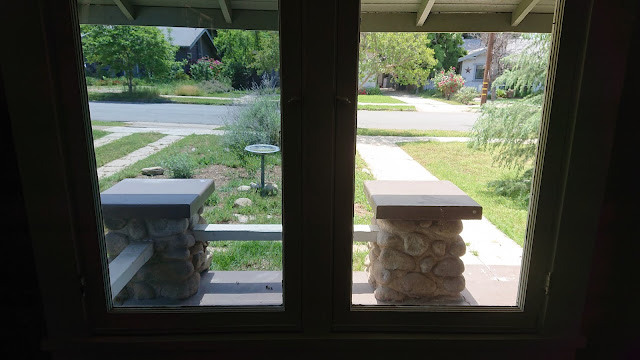 All in all, I'm quite happy with my decision here, although if I had to do it again, I think I would have picked this other Gila product that is supposedly less dark in color.  The film I chose is a bit darker and more reflective than I really wanted. In the evening or on a gloomy day, it's pretty dim.

But, I think this will work out well.  Supposedly it's removable-ish if I decide I don't like it or some future owner doesn't like it.  My boss put something like this on his windows 15 years ago, and apparently it's held up and is still very effective, so that's a good sign.
Posted by morangm at 8:50 PM