The Exclusion of Atticus Ratcliffe

Many weeks ago, I awoke muzzily in the early morning hours thinking I was hearing something skittering around in the attic.  However, I was half asleep, and by the time I actually got up in the morning, I wasn't sure if it was real or something I dreamed up.  It wasn't until a few weeks after that when I heard it again that I was sure.  This time, wide awake, I listened while an unknown critter skittered around in the attic and up and down the interior walls, scratching, scrabbling, and munching.  Oh goody, an attic mammal!

Luckily, I knew exactly who to call: Lowell the Mammal Guy!  Lowell specializes in wildlife removal and exclusion, particularly mammals.  He's the one I hired several years ago to extract Rigor Mortis Kitty from my crawl space (an event apparently so mundane for him that he did not remember it at all), but he also deals with live mammals. Lowell said that based on my description, my attic mammal was likely a rat. 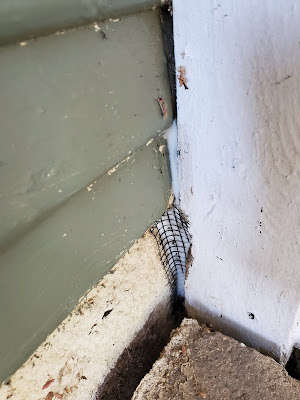 Lowell, who smelled faintly of skunk, came over and meticulously examined every inch of the house exterior and attic.  He found one rat dropping in the attic but did not find evidence of a large-scale infestation, thank goodness. Seems like Atticus was just exploring or newly moved in rather than really living there. Lowell came up with a to-do list to seal off every possible entry point and came back again a few days later to complete the work with an impressive level of detail and thoroughness.  He re-screened the attic gable vents, screened off various roof vents, sealed the HVAC wire conduit thingie, improved some of the crawl space vent covers, and caulked up various cracks.  He identified Atticus Ratcliffe's likely entry point, a tiny crack where the house's two weird add-ons meet in the back. The crack seemed to lead into the crawl space and had some chew marks on it.

Lowell also set two traps for Atticus, one in the attic and one in the crawl space.  I was sincerely hoping that Atticus was outside when Lowell did his work and not trapped inside. However, Lowell had barely left when I heard Atticus crawling around in the wall near the water heater.  Darn.

Then followed about two weeks of confusion and anxiety over the fate of Atticus Ratcliffe.  I was sure I had heard him in the wall, but then the next night I heard nothing, and there was nothing in either trap the next morning. The following night, he was dancing in the attic again, but he did not go for the traps.  Lowell said rats are "neophobic", meaning that they don't like new things, so they might avoid a new trap for a while. They also often cache food, so Atticus might not be hungry enough to be interested in the bait.

After that, I heard nothing and found nothing in the traps for days and days and days. If he wasn't dancing in the attic, where was he? Had he gone outside again through some access point Lowell and I hadn't found? One night I woke up to scratching noises at 2am, but it wasn't Atticus.  It was my nocturnal neighbors cleaning their porch. Then the weather turned cold again, and Atticus was back to dancing in the attic early every morning.  Throughout this period, I was plagued by anxiety dreams, waking up in the early morning hours to every small sound, unsure whether I had heard something or dreamed it up, and dreaming about poor Atticus either slowly starving to death or me having to put him out of his misery because the trap didn't fully kill him.  Or what if Atticus wasn't even a rat?  What if he was a squirrel?

I was on the verge of having Lowell come back to search for something we missed when I checked the crawl space trap and to my great surprise found that poor Atticus had met his demise!  Poor little bugger!  At least the trap seems to have worked correctly and killed him instantly, so hopefully he did not suffer. He was actually kind of cute, aside from the nasty long tail. He had pretty fur, cute round ears, and delicate little paws.

I felt bad for Atticus Ratcliffe.  He was just trying to make a good life for himself.  I didn't want him to die.  I just didn't want him living in my house. I would have been perfectly happy for him to go on living somewhere else...oh no, wait, I think this makes me a NIMBY!  Uh-oh. Darn. Um...